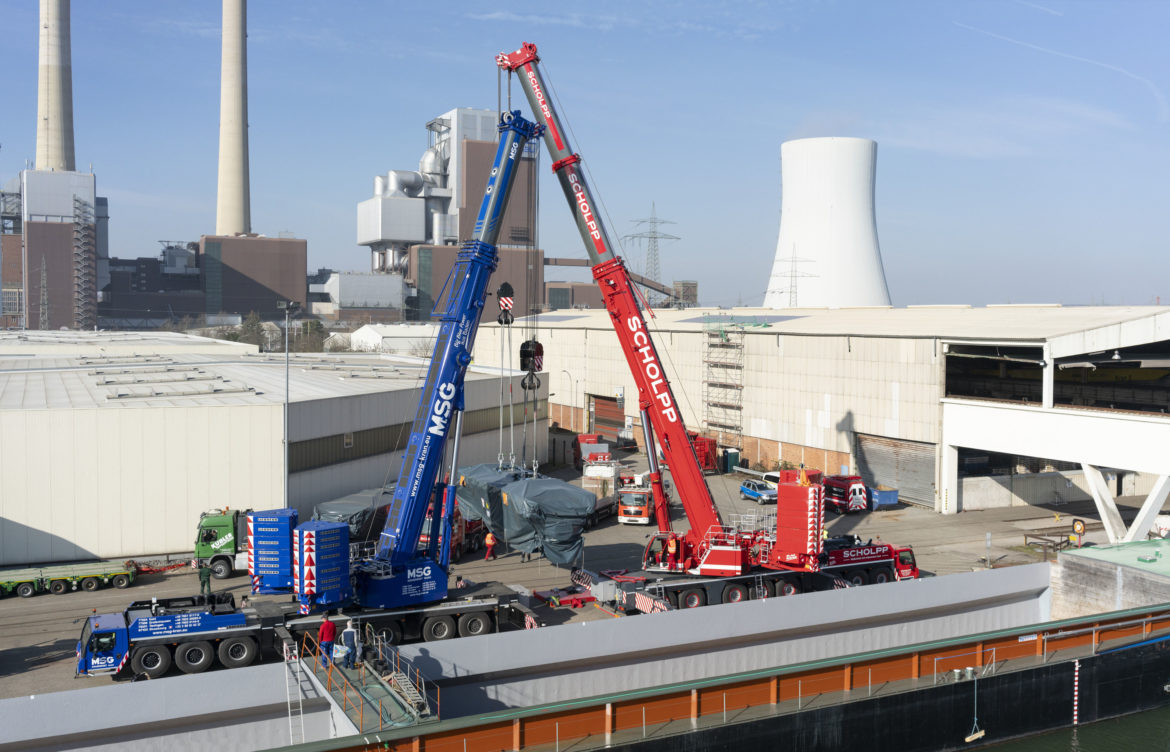 Ehingen / Donau (Germany) May 2019 – South German crane and transport contractor Scholpp obtained support from Kehl in the State of Baden-Württemberg for the first job for its brand new Liebherr LTM 1450-8.1 mobile crane. Together with an identical mobile crane operated by MSG-Krandienst, enormous motors designed for power generation were loaded onto a freighter in tandem hoists.

The heavy load quay at the Heilbronn industrial port facility was the first destination for the shiny new mobile crane operated by Scholpp Kran & Transport GmbH. It was driven straight to its first crane job from the Liebherr crane factory in Ehingen, where it was scheduled to complete the job together with another LTM 1450-8.1 crane. The new mobile crane, freshly painted in Scholpp’s red livery, and the blue crane from MSG Krandienst GmbH hoisted the motors weighing around 165 tons into the cargo space of the barge.

Manufactured by mechanical engineering company MAN in Augsburg, the massive units had covered the route to Heilbronn over the course of three nights on country roads. The load then had to be transported to Mannheim by waterway from Heilbronn as a result the fact that there were no overland routes with sufficient load capacity to its final destination.

Liebherr Service sparkles through its flexibility

The first job for the new addition to its crane fleet arrived sooner than expected for Scholpp. That meant that the crane personnel training in Ehingen had to be stopped after two days and continued on the heavy load quay in Heilbronn. No problem for the Liebherr after-sales service team – Service Engineer Tobias Hunger provided advice and support for the two crane operators, first during training at the factory site and then during their first job with the new machine. Denis Hedl and Aingeru Tejedor were able to rely on the service engineer from Liebherr during both the set-up process and the operation to load the massive motors.

Scholpp has stationed the new LTM 1450-8.1 at its Stuttgart site. In addition to handling and crane work of all types, the modern mobile crane, with its 85 meter telescopic boom, will also frequently be tasked with erecting construction cranes. Crane driver Denis Hedl was very impressed with the new mobile crane. “Not only is the 450-tonne crane very easy for the crane operators to use, moving around it is also very safe and really comfortable due to the platforms, steps and railings. The thing is really good.”