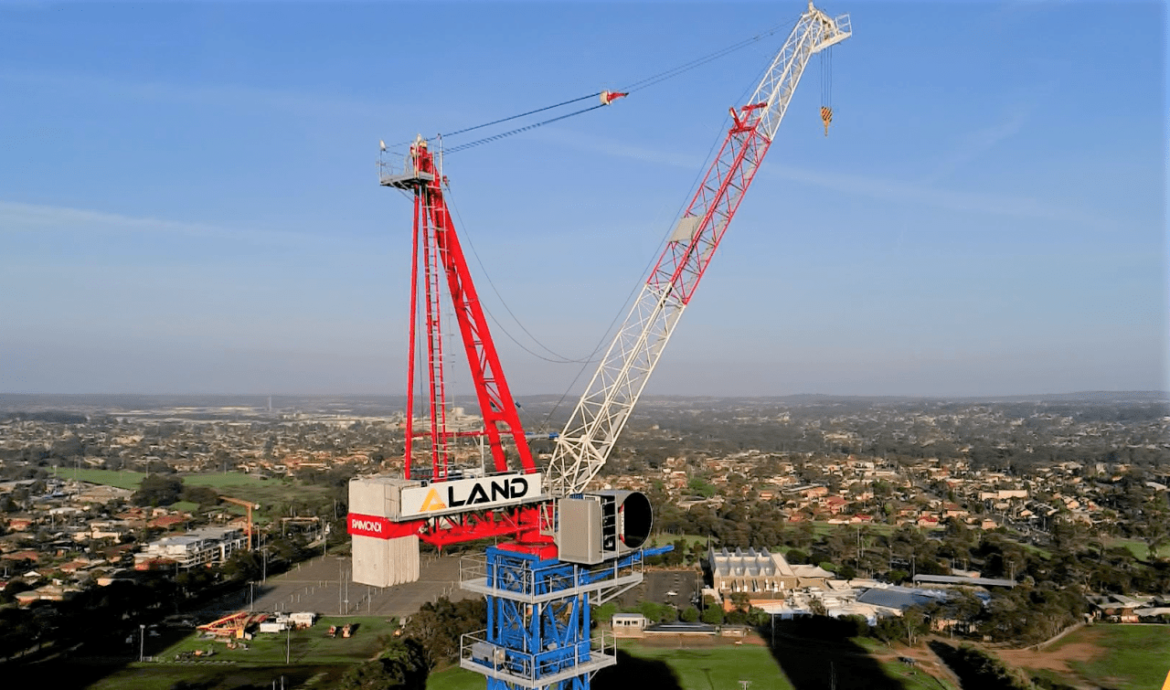 Strictly Cranes, official Raimondi agent since 2013, dismantled a Raimondi LR213 luffing jib crane at a working height of 100 meters in Liverpool, New South Wales, Australia. Originally commissioned for a timeline of two years, the developer-builder completed the ambitious project in just 12 months. “The 23-level structure, by our client ALAND, was ahead of completion schedule; it was an efficient and smoothly-executed operation. Strictly Cranes supported the jobsite with six team members for the crane’s dismantle,” said Ramey Alkhoshaibi, founder and Commercial Director, Strictly Cranes. “We had a Lead Rigger and Lead Technician, as well as two riggers and a Dogman, all overseen by the company’s Operations Manager onsite.”

Strictly Cranes was able to dismantle the entire 100 meter-high luffer, as well as the 30 meter jib, in just one day using a 350 tonne mobile crane. The same mobile crane was then downsized the following day and employed to load up 16 trailers. “It is rare to see cranes go down from such a high height. By comparison, cranes working at a much lower height often take two days to dismantle and an additional day of loading and removal.” The Raimondi LR213 was chosen for this project as it has a high freestand with the additional booster tower, thereby allowing for minimal climbing and bracing of the crane to the building.

Image from the original erection sequence of ALAND’s development

Purchased by ALAND last year, the luffing LR213 will now be undergoing on-ground mechanical and electrical maintenance assessments ahead of its placement on the next jobsite that the developer has planned at the end of this year, to be supported by Strictly Cranes.  As part of its full-circle heavy lifting offering, Strictly Cranes also provided the lifting gear: Boscaro brick cage, kibble, man box and first aid cage, heavy duty lifting chains for the precast panels, and the general quarterly maintenance and 24/7 call out for immediate service needs throughout the project’s duration.

SARENS LAUNCHES THE LARGEST CRANE IN THE WORLD: THE SGC-250

Liebherr at the Pollutec 2018 trade fair