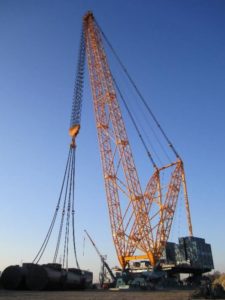 Last week, Sarens introduced its new super heavy-lift crane, the SGC-140, at an event in Ghent, Belgium. Sarens reported that clients are demanding cranes so large that it could not buy new machines to meet the industry’s demands. Instead, it designed its own cranes for these projects.

At its base, the SGC-140 measures 44 meters in diameter and has a 4,000-tonne counterweight consisting of 40 counterweight containers. The ring is made of 64 steel mats, a circular double rail beam, 64 front wheels, and 32 rear wheels. In addition to supporting the counterweight, the machinery deck can hold six power pack units, eight winches, and the operator’s cab. 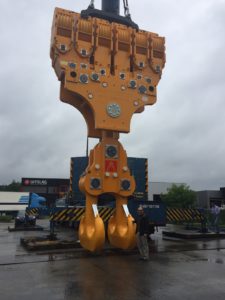 Bob Levy from Associated Wire Rope & Rigging, RopeBlock’s US distributor, standing next to the hook block.

To gain a perspective on the size of this machine, the hook block, manufactured by Ropeblock, weighs 102 tonnes (225,000 pounds). It has a working load limit of 3,200 tonnes is equipped with 30 sheaves to provide up to 60 parts of line with 10 parts per winch. The block is equipped with Ropeblock sheaves that use dry graphite lubrication for maximum uptime. The block can be modified to work with either six, four, or two winches.The swiveling twin Ramshorn hooks slant up to 60 degrees, and the hooks’ updated design improves sling life. Reeveguards for the patented Superreeve connector socket increases rigging speed.

This machine is equipped with six winches. The four 40-ton main hoist winches each hole 1,300 meters of 50mm rope and the two 40-ton boom hoist winches each hold 2,100 meters of 50mm rope. Maximum line-pull is 600 kN. The crane is designed to operate in wind speeds up to 22.4 meters per second and withstand wind speeds to 56 meters per second when out of service. Maximum ground pressure is 25 tonnes/square meter.

Sarens notes that improvements on the new giant crane include the reinforced boom and mast, an upgraded boom hoist, improved winches and power pack units, and a new rail and bogie design.

The SGC-140’s first assignment will be on the TCO project in Kazakhstan, where it will be a crucial part of the oil refinery’s expansion. The TCO project is the largest contract that Sarens has signed in its 62-year history.

Full assembly of the crane takes six weeks (see video below). The steel mats and rails are first placed in a circle, and the bogies and machinery deck are assembled on the rail. The winches and power packs are then placed on the machinery deck, and the mast is erected with two cranes. The counterweight containers are stacked, and the boom is connected to the main hinge point. The boom hoist winches are then connected and used to raise the boom.