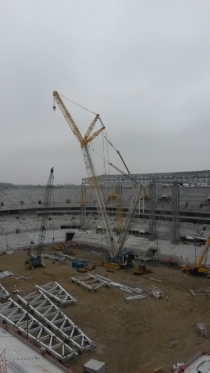 Sarens has used a Terex Superlift 3800 lattice boom crawler crane to install a steel roof frame on the Parc Olympique Lyonnais stadium, which is under construction in DÃ©cines-Charpieu, France.

Sarens decided to mobilise its 650-tonne capacity Terex Superlift 3800 crane for the lifting of the steel structure, due to its “versatility” and “high capacity at a short radius as well as high lifting capabilities when working at an extended radius without reconfiguring the boom,” explained Sarens project manager Sam Voeten.

The crane was transported over 800 km by road from its location in Cherbourg, France to the stadium site using a total of 46 trucks.

“We needed a total of 540 tonnes of counterweight for the structure, central ballast and superlift tray to perform all lifts,” said Voeten.

Guntram Jakobs, manager of product marketing at Terex Cranes, explained that the Superlift 3800 model is well suited to being transported long distances by road.

“No component is over 3 m wide, so the Superlift 3800 crane is built with transport in mind. It can be easily transported to any market around the world, and features like nesting boom segments and interchangeable counterweight slabs reduce the number of truckloads and lower transportation costs.”

Voeten went on: “The access tunnels for truck deliveries were only 5 m high by 4 m wide, so the narrow transport dimensions of the Superlift 3800 crane helped us to get components inside the stadium for rigging.”

Once on site, a crew of five assembled the crane and superlift structure within four days, configuring the machine with 60 m of main boom, 42 m of fly jib and 36 m of superlift mast.

The crawler crane’s structure was equipped with 165 tonnes of counterweight, 50 tonnes of central ballast and 325 tonnes on the variable position superlift tray, which offered working ranges from 11 to 19 m.

Sarens’ crews were charged with installing preassembled sections of the steel structure supporting the roof, as well as the smaller exterior flanges – which weighed about 50 tonnes each.

The roof supports were placed around the entire circumference of the stadium, and there was limited room for the crane to do its work, explained Voeten. “Terex helped us by studying the specific parking conditions for this project and corresponding maximum permissible wind speeds at the various working radii.”

Working at a radius of 43 m, the crane hoisted the large 150-tonne inner structure and positioned it at a height of 45 m. Positioning the smaller 50-tonne sections required the crane to work at an 81 m radius.