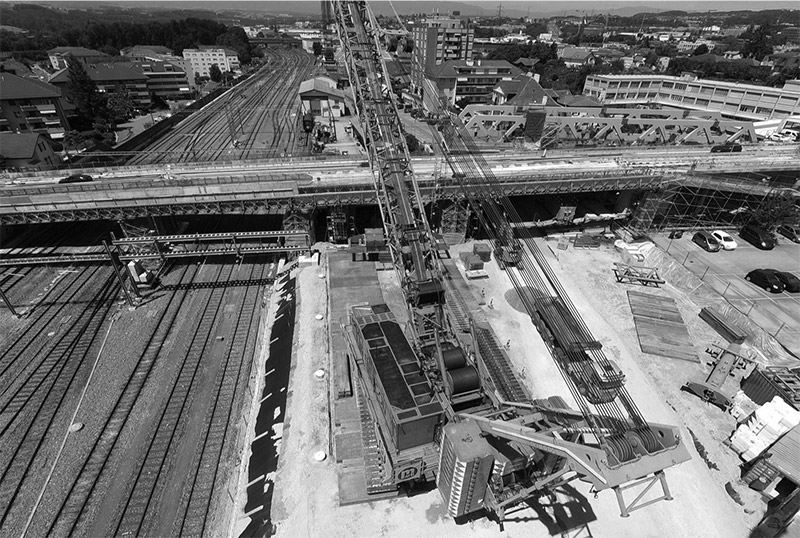 As part of the Swiss Federal Railways’ Projet du pont Bleu, Sarens has removed four 25-metre sections of an old bridge and installed new sections in their place. The operation took place on the outskirts of Lausanne, in Crissier, and was executed over the course of a month. Careful advance planning, however, was the key to making this project a success.

Sarens worked with the client to plan the bridge replacement project well in advance, carefully defining the lifting time frames so they were well-coordinated with international rail travel through Lausanne. Based on these plans, all lifting above the railway had to be performed after midnight and before 4:00 in the morning, and only on Saturday and Sunday nights.

To move the bridge sections, Sarens used the CC-9800 crane with SSL90m (main boom 90m with superlift) and the Sarspin System 4 x 150t. The CC-9800 crane was chosen specifically because it could perform 430-tonne lifts at 54 metres, given working access on only one side of the bridge. The crane also had to be able to drive 30 metres with a suspended load.

Sarens brought the equipment in from Germany and Belgium, transporting it via a total of 94 trucks. However, the rigging crew faced a crucial challenge: because no storage was available on-site, only three trucks could be placed in the unloading position at a time.

Sarens responded to the challenge by performing all crane assembly work along the road, diverting traffic to one lane while the crew and trucks used another. The six-person rigging crew had to be careful throughout the operation, due to nearby railway electrical mechanisms. Offloading and assembly of the crane’s heavier parts were done with a 500t mobile crane, and a 220t was used to complete erection. At this final stage, the road was completely blocked to traffic.

All lifts required slewing and crawling with a suspended load, and Sarens had to adjust the angle for each of them using the Sarspin system 4 x 150t.

Despite the particularities and challenges inherent in this project, the crew did an excellent job executing the operation. Thank you to everyone involved in making it a success!