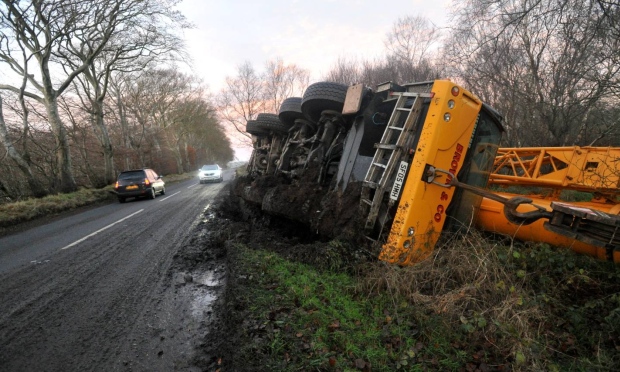 The incident happened around 7am on the B977 Dyce to Balmedie road, between the Parkhill Crossroads and Belhelvie.

Police were at the scene andÂ  warned of delays in the area but traffic was moving as normal by 9am.

Soil and other dirt spilled on to the road and driversÂ  were told to approach the area with care, as there could be a risk of skidding.

Aberdeenshire Council have been called to clear up the mess, but can’t until the crane has been recovered.

The crane was seen on its side on the grass verge of the road.

And two other cranes are needed to recover the machine.

Police have said the road was due to be closed when the cranes arrived.

A spokesman for Police Scotland said: â€œWe were called out to an incident on the B977 at 7.04am.

â€œA crane had left the carriageway and had left a bit of debris on the road.

â€œWe called the council to clear up the dirt, but drivers were warned to take care on approach and to also expect delays.

A Police Scotland spokeswoman said the crane is expected to be recovered tomorrow but was off the road and not blocking traffic. 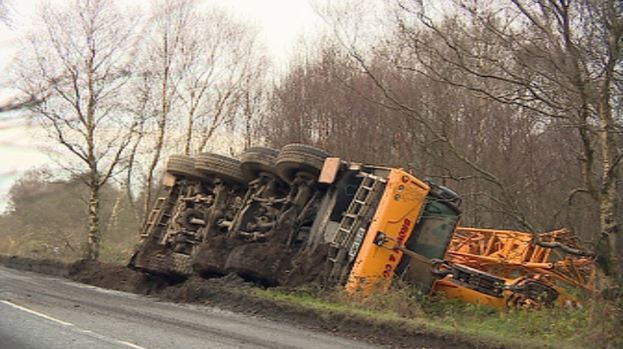 Road to close after large AT crane goes off B977 in Scotland was last modified: November 24th, 2014 by Ron Selby