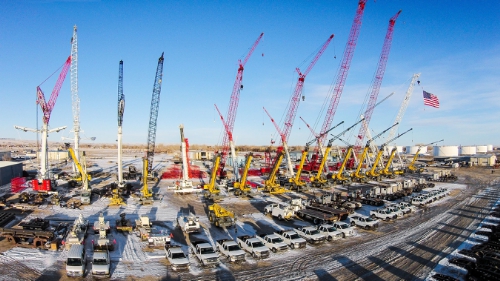 Ritchie Bros. (nyse and tsx:RBA), the world’s largest industrial auctioneer, conducted the largest single-owner auction in Company history this week, selling more than US$54 million of equipment for Energy Transportation in Casper, Wyomingâ€”including 38 cranes, which sold for US$35+ million total. The unreserved public auction on March 25, 2015 attracted 3,000+ on-site and online bidders from 47 countries. All assets in the auction were sold for Energy Transportation, the largest supplier of fully operated and maintained crane services, specialized rigging, and heavy haul transportation in the state of Wyoming. Among the auction highlights: a 2010 Liebherr LTM1500-8.1 600-ton 16x8x12 all terrain crane that sold for US$3.35 millionâ€”the most expensive all terrain crane sold by Ritchie Bros. to date.

“Our extremely successful Casper auction, featuring high-quality cranes, trucks and trailers, is one of the largest underwritten complete dispersals the Company has ever done,” said Ravi Saligram, Chief Executive Officer, Ritchie Bros. “The strong performance and pricing we achieved today reflects the power of Ritchie Bros.’ brand to reach and attract buyers from all over the world. This auction epitomized our strong customer relationships, our marketing prowess, our operational know-how, and most importantly the trust consignors place in us with their high-value fleets.”

More than US$43 million (78%) of equipment was sold to buyers outside the state of Wyoming. Online bidders purchased approximately US$20 million (36%) of equipment.

“The combination of an exceptional fleet of equipment, targeted marketing to our global network, and our reputation for fair and transparent auctions brought the crowds out today in Casper,” said Rob Giroux, Vice President, Sales at Ritchie Bros. “We registered thousands of bidders from every continent, including the biggest crane buyers in the industry, and saw active bidding at the auction site as well as online. We were honored to work with Dan McGlade on this dispersal, and are extremely pleased at the results we delivered.”

“Bidder turnout was even bigger than we expected, which resulted in strong equipment values in the auction,” said Dan McGlade. “Ritchie Bros. is the only company that could have put this sale together. Their marketing efforts alone were outstanding. They did everything possible to make sure people were aware of the auction and the results today are evident.”

“After 30+ years building this company and this fleet, for me today is bittersweet. There’s an outstanding group of people who have built this company. NCSG will continue to employ this amazing team and continue to offer customers the same great service Energy Transportation has built its name on,” added Dan.

More than 2,290 cranes, heavy-spec trucks, trailers and other equipment were sold in the one-day auction. Selling prices for each item can be found under Auction Results atrbauction.com.

PHOTOS AND VIDEO AVAILABLE: Photos of the Casper, Wyoming auction are available atrbauction.com/media. Interviews with Dan McGlade and Ritchie Bros. representatives are available by request. Members of the public and the media can follow Ritchie Bros. on Twitter @RitchieBros.