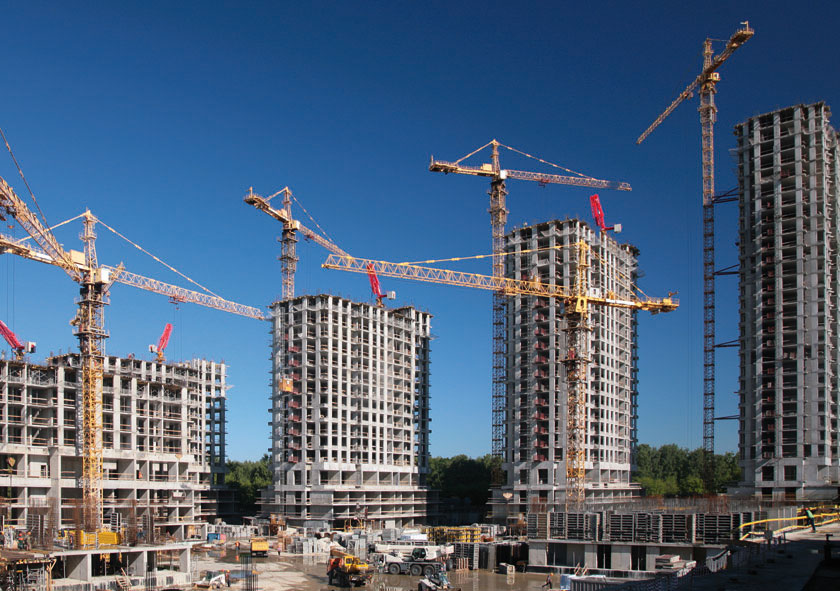 If one looks at the skyline of Mumbai or Delhi, thereâ€™s no missing the series of tower cranes of all heights, length, capacities and make, all configured to suit the project construction requirements. Considering the number of high-rise residential and commercial buildings coming up, not to forget the mass rapid transportation projects, the number is only growing.
At the bc India 2014 expo held in December last year, three companies launched new tower cranes. Of these, the prospective demand for tower cranes led two companies to enter
this sector.
While the demand for cranes is estimated at 600 units in India, according to industry observers it is expected to go up to 2,000 by 2016. This is an exponential jump and little wonder why Indian and foreign companies are entering this market.
VG Sakthikumar, chief operating officer, Schwing Stetter India, says, â€œWe launched five products at bc India in December.We even announced our entry in the tower crane segment. Over the last couple of years we realised that the customers who buy our equipment also buy the tower crane. So we went to the drawing board and made a specification as to what our customers could be looking for in terms of the size and the features. The specification was drawn out by us and we got the prototype made in China from XPMG.â€ 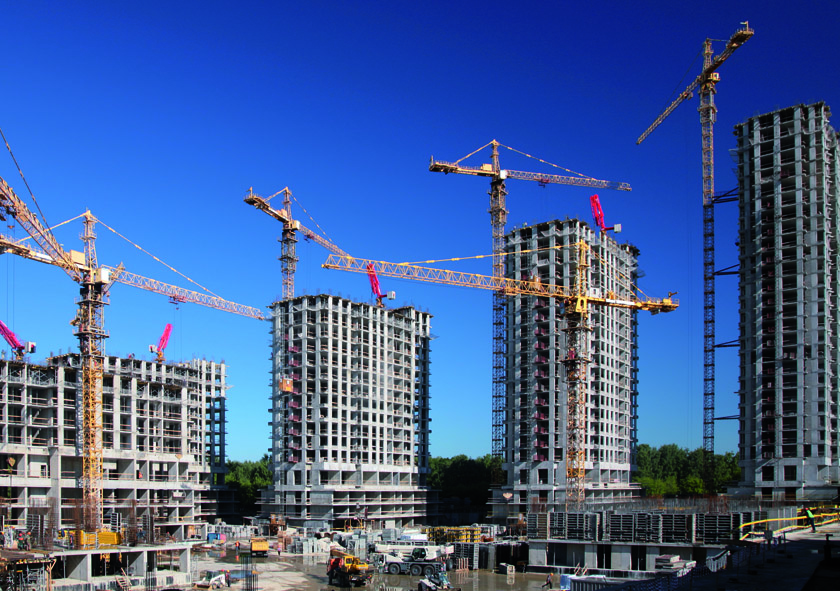 Initially, it plans to import the cranes to India. However, in the near future, Schwing Stetter will build the same at its factory in Chennai. It plans to start making one component at a time beginning with the mast and followed by the jib.
Another company that launched two new cranes was Manitowoc, which introduced two new Potain topless tower cranes. Both cranes are topless MCT models built at the companyâ€™s factory in Pune. Larger of the two is the MCT 205 which has a 10 tonne maximum capacity and can lift 1.75 tonne at its maximum jib end of 65m. The second topless model from Potain making its debut in India was the MCT 85. Smaller than the MCT 205, it has a five tonne maximum capacity and an ability to lift 1.1 tonne at its jib end of 52m. This practical unit is efficiently easy to transport, needing just two trucks for the entire top portion of the crane.
At the launch, Eric Etchart, president, Manitowoc, said, â€œWhile the cranes market has not picked up so well, certain parts of the globe have seen good demand. However, Asia has been a good story. We launched these cranes in China and now in India. Itâ€™s only a matter of time before new projects are announced and we make a breakthrough.â€
Thibault Le Besnerais, Manitowoc global product director for tower cranes, said of the MCT 85, â€œThis size is by far the most popular in India.â€ It sits on 1.2 x 1.2 metre mast sections for a small footprint and it is available with a traditional DC hoist as standard or a smoother and faster variable frequency hoist as an option.

Although there remains an existing demand for the lighter class units, the advent of many high-rise projects and adoption of precast building techniques, in real estate projects is expected to promote demand of higher capacity cranes in 10-16 tonne and above ranges. Presently, according to the crane manufacturers and distributors, the higher capacity range contributes approximately 10-15% of the demand from the real estate construction sector in the region.
Estimates offered by reputed manufacturers and distributors of tower cranes in India put demand for cranes at nearly 55% in Delhi, NCR and Mumbai alone. Manufacturers know that a strong business presence can only be made by meeting customer requirements, which can only be done through precise product configurations, timely equipment availability and requisite support. This is because the market holding enormous potential for volume business is ridden with tough competition coupled with extreme price sensitivity among contractors.
Leong Kwong-Joon, regional product manager for tower cranes at Manitowoc Cranes, said, â€œIn India, and indeed around the world, weâ€™re seeing contractors wanting to place more tower cranes on job sites to speed up construction schedules. Because topless cranes have no cathead at their top, itâ€™s easier to overlap them and overall working heights for the cranes donâ€™t need to be so high. Topless cranes are also faster and easier to erect. To meet these growing demands, weâ€™ve introduced these latest two units to give contractors even greater choice when planning the crane layout on their job sites.â€
Anil Mudgil, VP-CED, Action Construction Equipment (ACE), said at bc India, â€œWe are in the business of material movement. And movement and distribution of concrete also falls in the same line. Wherever we have tower crane, only those are places where a placer is used. So it becomes relevant for us to have a focus on high-rise buildings. This is a new line we are entering into where we will have not only hydraulic placing booms which can plank up the building but we are also going in for mechanical booms whose advantage is that cost can be realistic.â€

In terms of new markets, Tushar Mehendale, MD, Zoomlion Electromech, says, â€œTower cranes is a natural extension for us. We formed our JV with Zoomlion last year in June. Then we began manufacturing and selling. Even though the market was not buoyed, we as a company grew in this segment. We changed our focus to the international market. Although we have had a presence in Dubai for a long time, we have got new products and tied up with local guys and set up a manufacturing base there. Now we are eyeing Saudi Arabia and CIS countries. From India, we cater to Africa, Kenya and South Africa through our partners.â€
The large size of the market in those countries makes it unviable for Zoomlion Electromech to manufacture the entire crane in India. The structural part is made here and then the rest is through contract manufacturing in those respective countries.
Ability to deliver higher productivity is the major demand determinant of tower cranes in big size, complex and cost-intensive projects. This is if the project is an industrial (refinery projects with many trains) or power projects both pertaining to thermal and hydro projects. Most of the tower cranes manufacturers are of the opinion that quality of steel (95% of the component) of tower cranes allows the crane to deliver higher productivity. Superior quality of steel used in the tower cranes neutralizes possible impact on the mast and jib of the crane during erection, functioning (lifting or slewing) or dismantling.

The industrial cranes market in India is highly fragmented. About 30% of the demand comes from the government sector and PSUs while the remaining 70% from the private sector. In fact, going by what some manufacturers say, the higher up demand comes mainly from the Western region (55%) followed by South at about 25%, then North with 15% and finally the East. Most of the demand comes in from the private sector as initiatives taken by them for projects are much higher and pertain to construction. Their ability to adopt new technologies and also a sharper business sense makes them much sought after by the manufacturers.
Raman Joshi, MD, Manitowoc India said, “In India, the first quarter of 2014 was really good but the second and third quarter showed something of a lull as there was hardly any activity. The projects were stalling and the funds were not available. But fortunately, the last quarter of this year has turned around and the outlook is good, riding high on the back of the new government’s proposed thrust on infrastructure development. We feel that now the situation is quite good for us. India in fact needs a lot of urbanisation and the announcement of 100 Smart Cities will certainly change the scenario of the next two years.”
At bc India, Everest Engineering displayed new tower crane anti-collision device. Everest has entered into an exclusive tie-up with Hitech China for marketing new model anti-collision device in India. Informing about the anti-collision device, Ramdev, director, Everest Engineering, said, “The anti-collision device prevents collision with nearby structures, buildings, trees and other tower cranes working at the close vicinity. The component is much critical as it provides total safety coverage to the tower cranes. This is in contrast to safe load indicators.”
The demand for industrial cranes in Japan is 20,000 per annum, in Germany 40,000 and the demand in China stands at 200,000 cranes per year. These large quantities give global manufacturers the advantage of economies of scale; allowing them to consolidate their global quantities and manufacture in bulk, thus reducing costs and making their products very competitive. Moreover, most developed countries have very stringent regulations that govern industrial crane manufacturers.
Due to fast pace of mechanisation in construction activities and adoption of pre-cast construction technology and tight project completion schedules, demand for tower cranes in India is expected to go up. Zoomlion alone has over 650 tower cranes in operation in India. Moreover, the emerging construction scenario makes tower cranes the ideal equipment for big ticket infra projects. “We are in a strong position to supply such crane products accurately configured to various project requirements. Our technical association with Zoomlion is expected to enable the company to provide a diverse range of tower cranes to the construction industry. We offer quality products and prompt after-sales support for all industrial cranes irrespective of its make. This way we are able to retain our loyal customers,” says Mehendale.

A new HVL for Hyundai