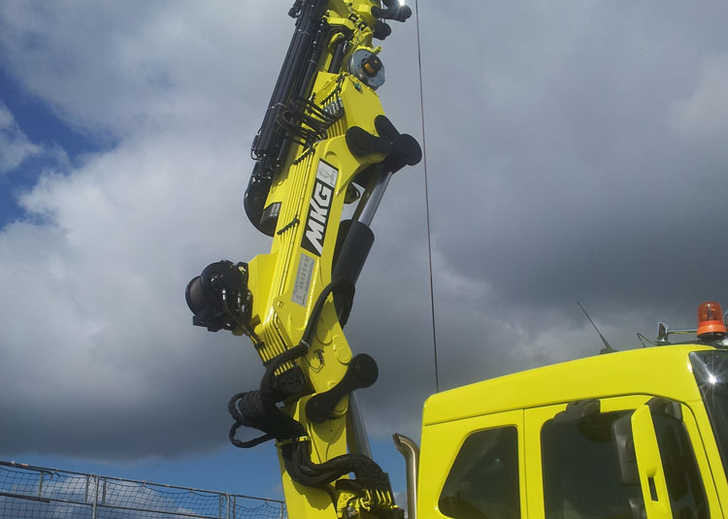 The new HLK 801 HP articulating crane from MKG in Germany

Articulating crane manufacturer MKG in Germany has added the HLK 801 HP to its heavy crane range.

In addition to the conventional four outrigger support base, the new crane has an additional dual front support with a maximum permissible load of 13.5 tonnes. It helps maximise capacity through 360 degrees on a narrow outrigger spread of 8.61 metres, the manufacturer said.

The crane lifts 16.5 tonnes at 4 m radius. With six extensions giving an hydraulic outreach of 16 m, plus a four extension hydraulic jib, maximum outreach is 24.75 m.

The crane works with its continuously variable ACS 3 Stability System in conjunction with the new MKG ACS 3 Plus system. Sensors on the crane monitor the inclination of the vehicle in real time and allow optimum utilisation of the load capacity in relation to stability, the manufacturer said. On a heavy haulage tractor the system takes into account the influence of a ballast box on stability and calculates capacity accordingly. Outrigger extension is also taken into account.

Also fitted as standard is MKGâ€™s ALG system which is an automatic load-dependent speed control. When lifting heavy loads, the system recognises the request and automatically switches to ALG mode, which reacts in proportion to the load. The ALG works to prevent dangerous load swing, to protect the crane from excessive stress on the structure and to reduce wear.

A 3,900 kg winch is fitted, including anti-two-block protection, and there is a new HBC radio remote control with a display of the load weight in kg, not just as a percentage of the capacity.