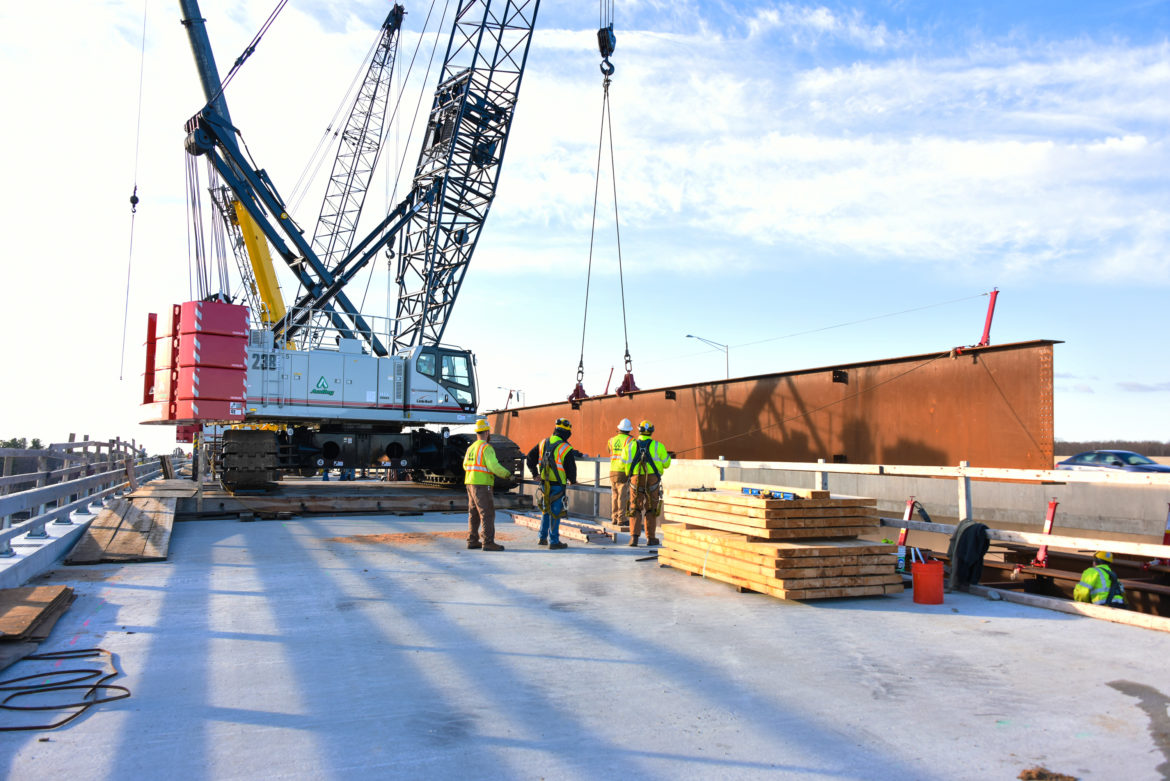 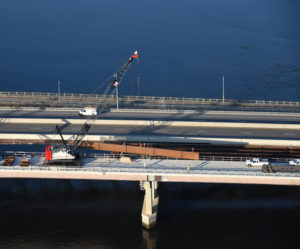 In order to complete the project, R.S. Audley had to remove more than 3 million pounds of 50-year-old steel using several cranes from its fleet, including a 110-ton Link-Belt 218 HSL lattice-boom crawler crane.

By mid-2016, steel replacement on the refurbished northbound lanes of Little Bay Bridge had begun. Steel erection was done by working from both ends of the 1,589-ft.-long bridge to the center, with five girders across with diaphragms connecting and strengthening the superstructure over the existing piers.

One of the most difficult elements to the steel replacement was the natural element of wind gusting up the bay from the Atlantic Ocean. For lifts toward the center of the bridge, both Link-Belt cranes were used in the early morning before winds picked up, each lifting the 100-ft. beams. The 155-ft. long center beams weighed 78,000 lbs. each. The cranes lifted the longer beams in tandem, and the beams were adjoined in the middle to form the center span. Steel diaphragms were installed the rest of the day to space the beams alongside each other.

“Aside from the wind, the 3 percent grade change coming up the bridge is something else to take into consideration,” said Scott Stevens, vice president for R.S. Audley. “You must adjust each pick point a little bit to make sure the beam is hanging correctly for final placement. Using two 25-ton Crosby beam clamps, the operator is able to reach out to the predetermined point, make sure it’s hanging correctly, pick it up and swing it out into position and marry it up to the previously set field splice.”

In order to work up and down the bridge deck meant R.S. Audley Inc. only had the working space of two lanes at a time, which was 28 ft. wide, to operate the two Link-Belt cranes. The new span went five girders across with diaphragms connecting and strengthening the superstructure over existing piers.

“The only weight restriction we had was keeping the moving load of our cranes down below 300,000 lbs.,” Stevens said. “We were able to do this by removing counterweights as necessary during travel between pick locations. The stacked counterweights of the 238 and 298 made this a simple and straightforward process.”