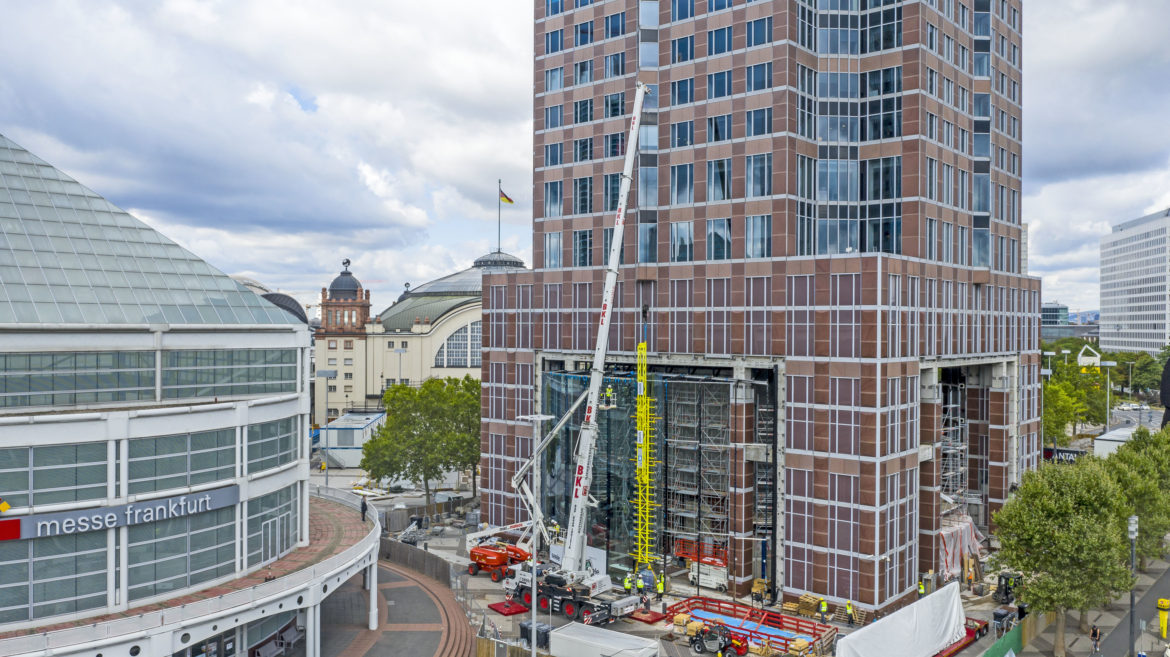 Ehingen / Donau (Germany) October 2019 – The 256.5 meter Frankfurt Exhibition Center Tower was the tallest building in Europe when it was completed in 1991. Now this landmark in the Main metropolis is being refurbished. On behalf of the facade specialist seele based in Gersthofen near Munich, the mobile crane team at BKL Frankfurt used Liebherr mobile cranes to install giant glass elements.

As part of the refurbishment of the lobby on the ground floor, seele was asked to design, manufacture and install an 1800 square meter steel and glass facade for the entrance area. In July, an LTM 1090-4.2 operated by BKL Baukran Logistik GmbH took on the hosting work for the first 17 meter long glass element which, with a weight of around 6 tonnes, is probably one of the largest laminated curved panes of glass to be installed in a high-rise block to date. A special glass vacuum system with 92 cups and a hoisting force of 9 tonnes was used to hoist the glass to a height of around 20 meters, requiring a great deal of precision.

Since August, the crane specialists from BKL have been using an LTM 1100-4.2 to install the next 6-tonne elements which had to be hoisted up to 25 meters laterally and vertically as part of the refurbishment work. The installation work is scheduled to continue until November. One of the special challenges of this crane job was the limited crane set-up area on the skyscraper’s underground car park, which meant that mobile cranes with a maximum of just 4 axles could be used. The limited ground pressure of the crane outriggers also had to be given due consideration when planning the job.