Liebherr LTC 1050-3.1 lowered to get through Ehrenbreitstein Fortress 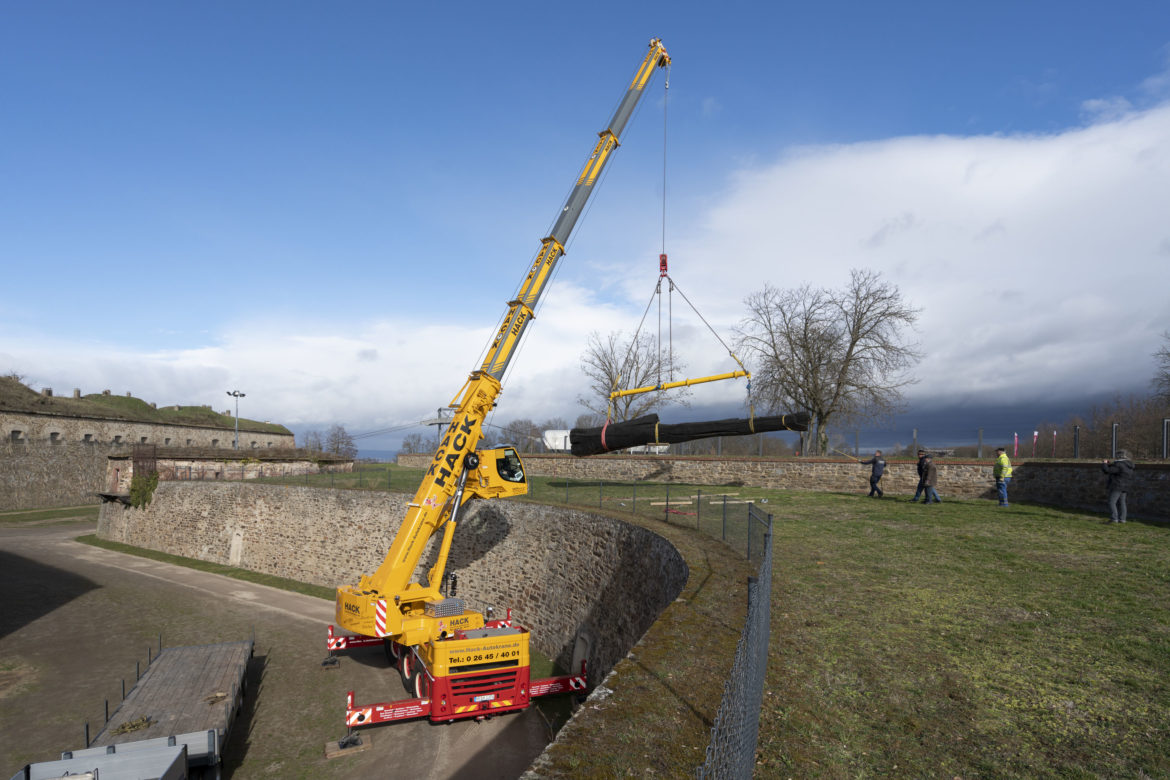 Ehingen / Donau (Germany) May 2019 – a Liebherr LTC 1050-3.1 mobile crane had to complete several hoists at Ehrenbreitstein Fortress near Koblenz to erect and remove works of art weighing several tonnes. The compact crane had to pass through two narrow points en route through the massive defensive walls to the place of use. Things became particularly challenging for the driver and vehicle marshals in a 25 meter tunnel where the distance between the crane and the historic structure was just two centimeters in some places.

The adventurous trip through the fortifications of the fortress high above Koblenz played out almost as if the master builders who planned and constructed the site in its current form 200 years ago had measured everything with Liebherr engineers and adjusted the clearance width and the vehicle’s dimensions so that they fitted perfectly. Precision steering maneuvers and perfect commands from the vehicle marshals were required to ensure that the LTC 1050-3.1 from Neuwied crane contractor Hack Schwerlastservice GmbH could squeeze safely through the tunnel from the ditch gate to the large fortress ditches.

“We had a whole two centimetres of space between the crane and the tunnel wall at the narrowest point.”

Last year the crane erected the sculptures in the massive fortifications. Thomas Berg, the man controlling the modern compact crane, had to lower the vehicle by over ten centimetres using the axle suspension before he was able to drive into the fortress. Together with lowering the telescopic boom, the clearance height was reduced by a total of 80 centimetres to just over three metres. This low vehicle height was essential for passing the tightest point in the passage because the tunnel cross-section narrows two metres above the ground. “We had a whole two centimetres of space between the crane and the tunnel wall at the narrowest point”, reports Herbert Schellberg, Project Manager at Hack. For the trips through the tunnel, Schellberg positioned himself on the crane to check the distances to the wall and keep his driver informed by radio.

The LTC 1050-3.1 proved to be the ideal choice for this job, and not just because of its compact design. The compact crane was also able to show off its strengths in full when hoisting the works of art in the fortress ditches. The exhibits, massive tree trunk sculptures weighing around five tonnes, had to be moved from the surrounding fortification structure at a height of around seven metres into the ditches and then loaded onto trucks for forward transportation. Using the telescoping cabin, crane operator Thomas Berg was able to keep the load in view at all times during the attachment and hoisting processes – a massive advantage for erecting the sculptures in terms of safety during the crane work.

In addition to its small dimensions, the extremely good maneuverability of the Liebherr crane was also a massive benefit for driving within the fortifications. The driver of the LTC 1050-3.1 has a total of five steering programs available. These and its compact design mean that the turning circle of the vehicle is just 7.5 meters. In extremely constricted conditions, this can be reduced even further by luffing the telescopic boom and removing the front storage box.

The Liebherr LTC 1050-3.1 compact crane was added to the fleet of Neuwied-based crane and heavy haulage logistics contractor Hack last summer and is primarily used for work in industrial buildings. The company has several branches between Düsseldorf and Frankfurt, including for construction cranes, recovery services and heavy haulage. The crane fleet consists of over 20 mobile cranes, the majority of which were supplied by the Liebherr Plant in Ehingen.