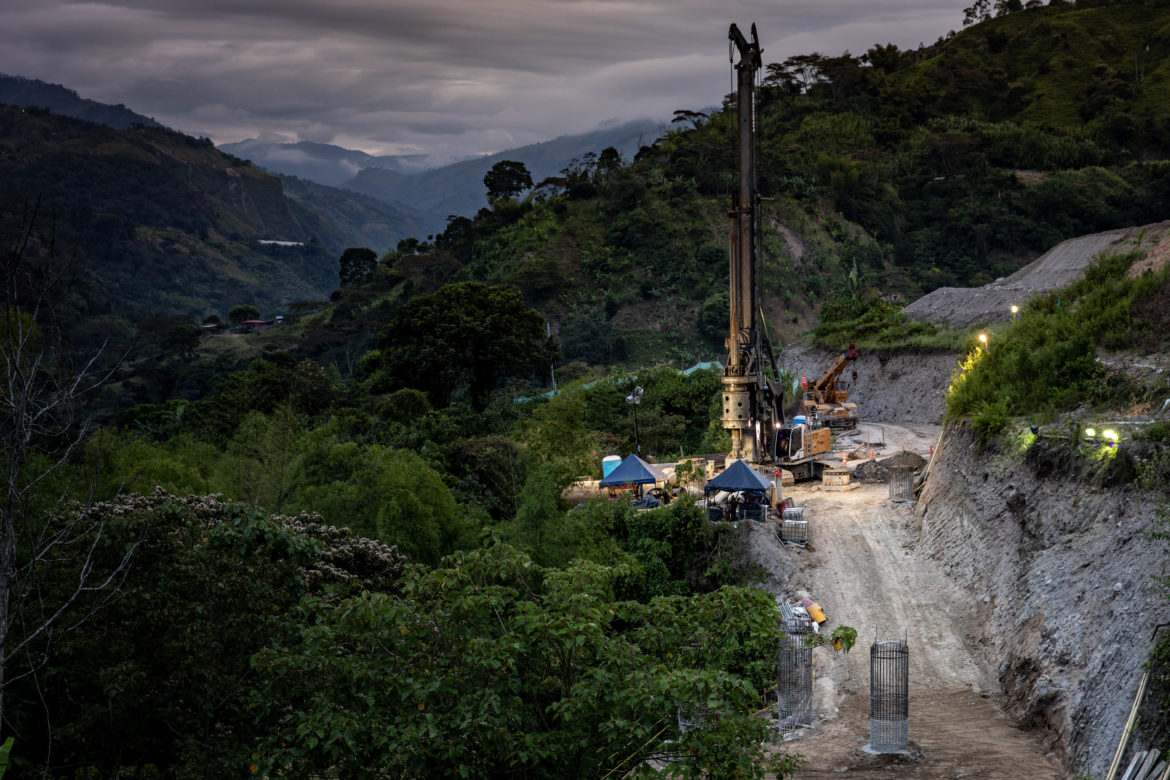 The Colombian government’s “4G Toll Road Concession Program” is the largest project in Latin America for the development of the road infrastructure. It involves the expansion or maintenance of about 7000 km of roads as well as the erection of new bridges. On the east-west route from Ibagué to Cajamarca, the company Mincivil S.A. is relying on the drilling rig LB 36 from Liebherr. The alternative is significantly more laborious.

One section of the large-scale construction project is in the Andes in West Colombia. In direct proximity: the Nevado del Tolima, beside the Nevado del Ruiz and the Nevado de Santa Isabel, one of the three largest volcanoes in the “Parque Nacional Natural Los Nevados”. A two-lane road is being built on the 35 km long route between Ibagué and Cajamarca and will include 40 bridges made of concrete elements. It is assumed the distance can then be covered in half the time that is currently required.

The contractor for the project is APP GICA S.A., a group of six Colombian construction companies. One of them, Mincivil, is applying the drilling rig type LB 36 from Liebherr for the installation of the bridge piles in Ibagué. Using the Kelly drilling method, the machine is installing piles with diameters of 1500 mm and average depths of 30 m. The number of piles varies according to the design of the bridge. Depending on the soil conditions, the LB 36 has a daily performance of 10 to 15 m drilling depth.

The proximity of the Nevado del Tolima is clearly noticeable on the job site. Due to the close vicinity of the volcano, the soil consists of a hard rock layer and is extremely difficult to crack. A task which is a little too ambitious for many drilling rigs. It would seem they bow in awe of the 5220 m high volcano. Daniel Rodriguez, Foundation Unit Business Manager at Mincivil, has already applied diverse deep foundation equipment. Thanks to his many years of experience, he is sure of one thing, “Only Liebherr comes into consideration with such hard soil conditions.”

Not only is the Kelly drilling a challenge for man and machine. In consideration of the partially extremely rough terrain, it is in itself a remarkable feat that Mincivil ever managed to transport the LB 36 to the job site. It’s not possible everywhere or the costs involved would be disproportionately high. The only alternative: install the piles laboriously and with a great deal of hard work by hand. This physical effort is also required in Ibagué. With tremendous effort the workers achieve 1.5 m per day. Of course, the comparison between them and an LB 36, with a daily performance which is ten times higher, is not fair. It shows, however, just how important reliable and high performance machines are for the completion of such large-scale projects. Daniel is pleased that Mincivil is reaching a high level of productivity through the good performance of the LB 36.