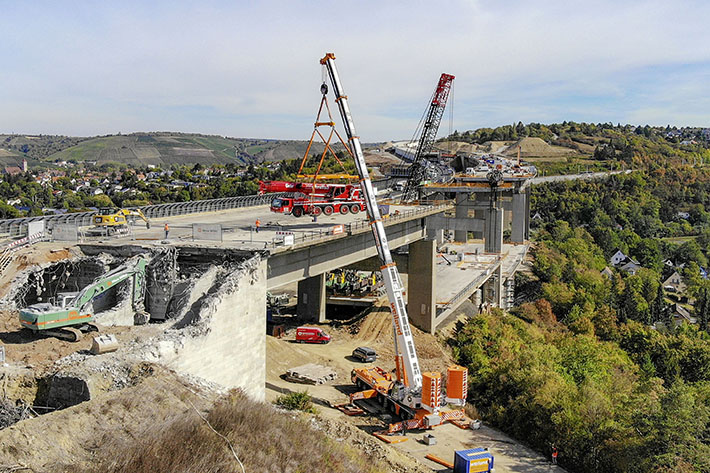 For years the Heidingsfeld viaduct on the A3 motorway to the south of Würzburg has been one of the largest construction and traffic jam sites on the German motorway network. Now, just for a change, there has been good reason for drivers, who were previously used to sitting in a traffic jam there, to pass this massive building site at walking pace. In a spectacular procedure, a Liebherr LTM 1450-8.1 mobile crane hoisted its smaller partner, an LTM 1250-5.1, out of the remainder of the bridge. 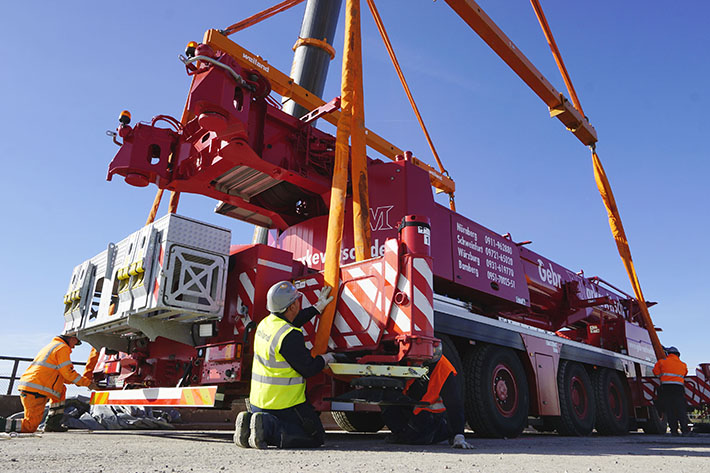 Attached – the 250 tonne crane is prepared for the hoist, the attachment equipment is secured to the crane outriggers.

Würzburg crane contractor Gebr. Markewitsch GmbH positioned the Liebherr mobile crane on the old motorway bridge to move the construction machinery, material and containers off the bridge, most of which had already been dismantled, into the valley. As a result of the advanced demolition work, however, there was no longer a route for the mobile crane to be driven off the site. Crane and transport contractor Weiland, from Lampertheim in the State of Hesse, was responsible for all the hoisting equipment for dismantling the structure and sent its new LTM 1450-8.1 mobile crane, to hoist the smaller mobile crane off the abutment.

Using a combination of three adjustable yokes, the 5-axle crane, which tips the scale at around 60 tonnes, was attached to the outriggers and lowered safely from the semi-demolished bridge into the valley, a height of around 20 metres. The Weiland crane in its orange and white livery had 134 tonnes of ballast to counteract the load of 64.5 tonnes at a radius of 18 metres.

VarioBallast® allows the boom to be luffed

Junior Director at Weiland Kran- und Transport GmbH, Sebastian Degenhardt, took the opportunity presented by the extraordinary crane job to visit the site near Würzburg. In addition to the 85 metre telescopic boom, the main features of the new, modern and extremely flexible mobile crane are its innovative VarioBallast® and VarioBase® according to Degenhardt, who is responsible for engineering and sales at Weiland. For example, on this job on the viaduct, it was only possible to position the mobile crane so close to the bridge structure because the reduced ballast radius made it possible to have a very small radius of the boom without a load. 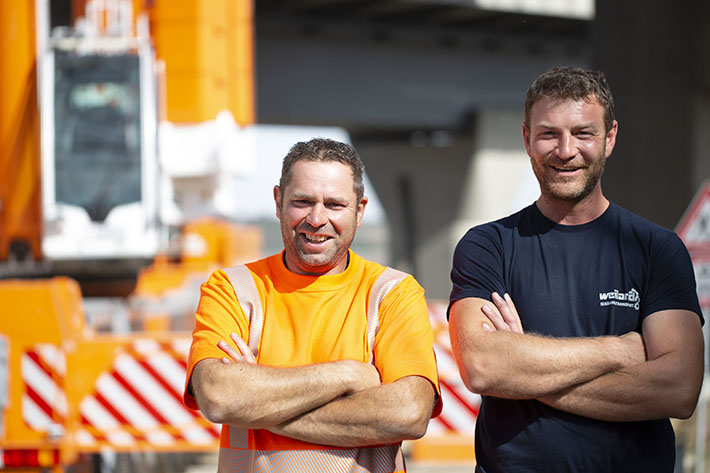 Weiland also engaged the services of a Liebherr LR 1600/2 crawler crane for the extensive demolition work on the 660 metre motorway bridge. This machine, owned by Helling GmbH based in Schwäbisch Gmünd, took the so-called strand jacks from the bridge abutments and positioned them on the new bridge sections which had not yet been completed. These enormous hydraulic strand jacks were used to lower the road segments, some of which weighed over 2000 tonnes, from the abutments, which are up to 60 metres high, to the ground.

The new viaduct near Würzburg is part of an infrastructure which extends for a total of around 100 kilometres, whose objective is to widen the A3 between Aschaffenburg and Würzburg into a six-lane motorway. The work was started in 2012 and is scheduled to be completed in two years.

Terex Utilities Seeks to Raise Awareness for Beds for Kids