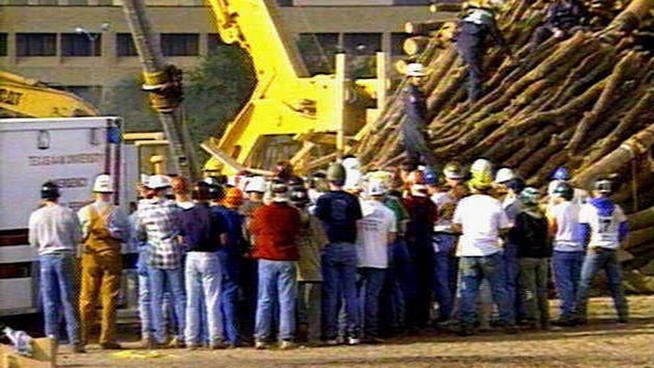 The last remaining lawsuit arising from the deadly Texas A&M Bonfire lawsuit collapse has been settled almost 15 years after the collapse.

The collapse of the 60-foot stack of more than 6,000 logs early the morning of Nov. 18, 1999, killed 12 people and injured 27 others. The collapse ended the almost-century-old A&M tradition.

Plaintiffs’ attorney Darrell Keith of Fort Worth tells the Fort Worth Star-Telegram (http://bit.ly/1meqMQs) that the final defendants, Zachry Construction Corp. and Scott-Macon Equipment, agreed to settle last month. The two companies provided cranes and crane operators for the student-built woodpile.

Keith, who represented five of the seven plaintiffs in the final lawsuit, said the settlement with Zachry is confidential at Zachry’s request but Scott-Macon paid $171,147. A&M and construction supervisors previously settled for about $8 million.

The 164ft-high eatery, where diners are SUSPENDED from a crane.