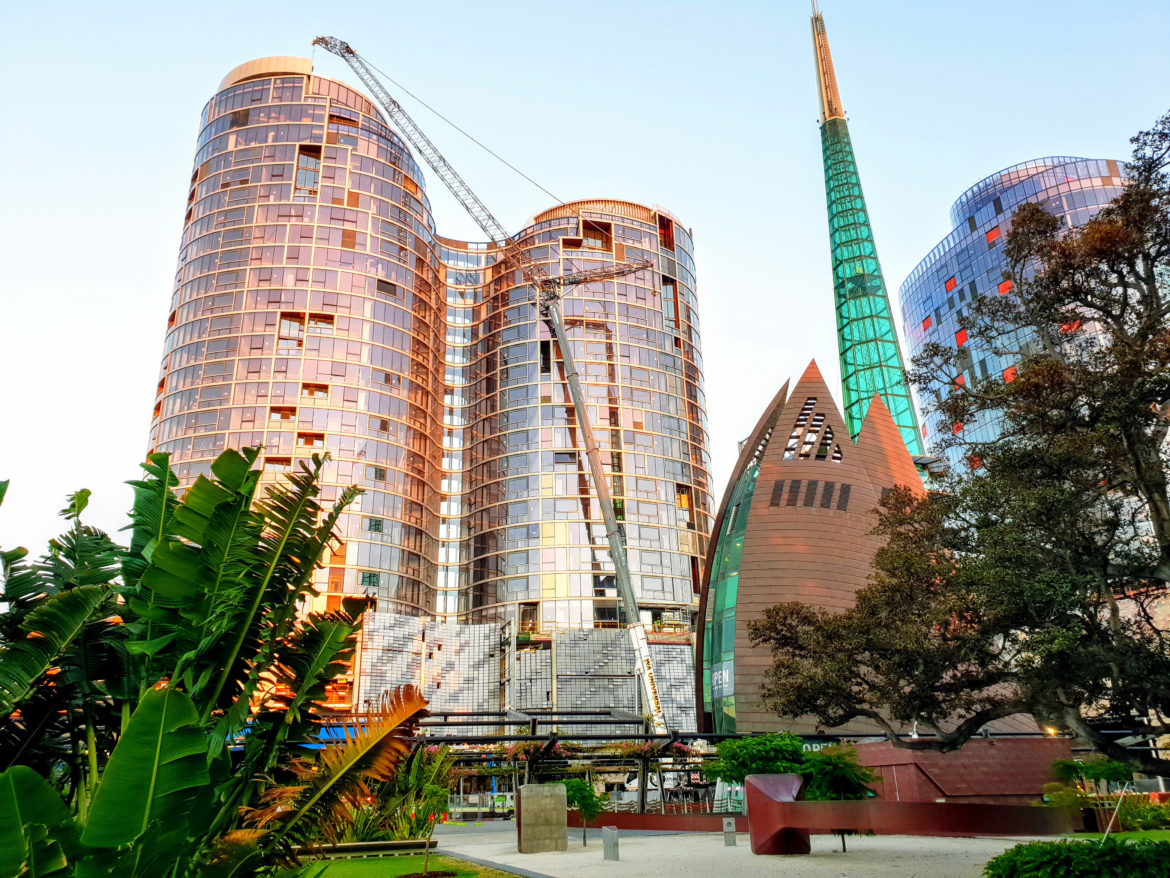 A Grove GMK6400, supplied by lifting experts WA Universal Rigging & Cranes, proved to be the best choice for a series of lifts on the new Ritz-Carlton taking shape in Perth, Australia. The hotel is set to become the centerpiece of the city’s prestigious waterside precinct. But space is at a premium on the Elizabeth Quay site, where the A$500 million hotel sits just 30 m from the waterfront. After assessing the requirements to make the series of lifts, contractors called for a unique crane with the reach to access the hotel roof; the capacity to manage the lifts; and the compact dimensions to fit the restricted space. Which is where the GMK6400 came in.

“Space was extremely limited on the Ritz-Carlton construction site. We needed a compact crane that was easy to set up with the capacity and reach to handle lifts over 100 m in the air,” explained Aaron Holding, general manager at WA Universal Rigging & Cranes. “Smaller 300 t cranes were too small to handle the lifts and larger cranes were too big for the space available. The GMK6400 was the best choice and delivered excellent performance on site.”

The 400 t capacity GMK6400 all-terrain crane offers the best lifting capability of any six-axle mobile crane. The main boom is 60 m and it also features an optional self-rigging Mega Wing Lift attachment for additional capacity when needed. For the Ritz-Carlton project, WA Universal Rigging & Cranes configured the crane with 54.6 m of main boom and 55 m luffing fly jib, along with 75 t of counterweight. The GMK6400 worked for 9.5 hours on multiple lifts, including the removal of a 3.5 t mini crawler crane at a radius of 42 m and a height of 90 m. Among the assist cranes used by WA Universal Rigging & Cranes was one of its 95 t capacity GMK5095 units.

“It took us 5.5 hours to set up the GMK6400 and in some instances clearance from the building was as low as 10 mm,” Holding continued. “Even though there were extreme space challenges, where we had to avoid the Ritz Carlton’s existing landscaping and façade, setting up the GMK6400 was relatively easy and smooth.”

Established in 1985, WA Universal Rigging & Cranes is a third-generation family owned business that has grown to become Western Australia’s trusted rigging and crane provider. All the company’s Grove cranes are purchased through WATM Crane Sales and Service, Manitowoc’s exclusive dealer for Western Australia and South Australia. Other Grove cranes in the WA Universal Rigging & Cranes fleet include a GMK6300L, a GMK5170, a GMK5130 and a GMK5095.

Scheduled for completion in mid-2019, the six-star Ritz Carlton hotel will occupy a 28-storey tower and feature 205 rooms along with a selection of residential apartments.