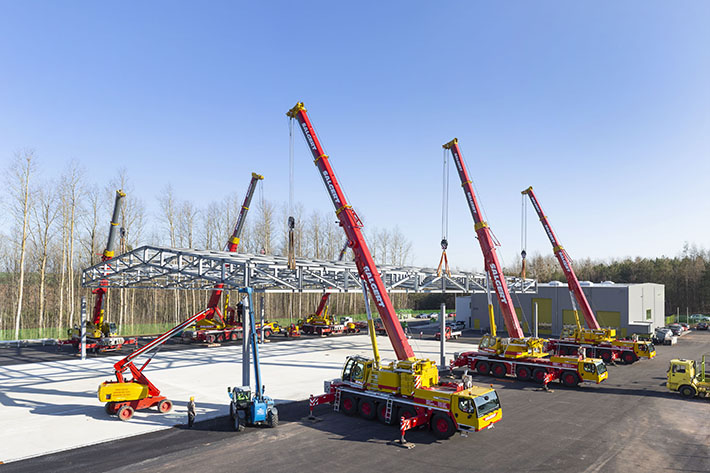 The roof construction for a future industrial building near Mechernich had to be hoisted to allow its support pillars to be extended. The job in the town in the Eifel Mountains was tackled by mobile crane and heavy haulage contractor Salgert based in Lohmar using six Liebherr mobile cranes. The steel structure measuring around 500 square metres and consisting of trusses and girders had to be hoisted in full. 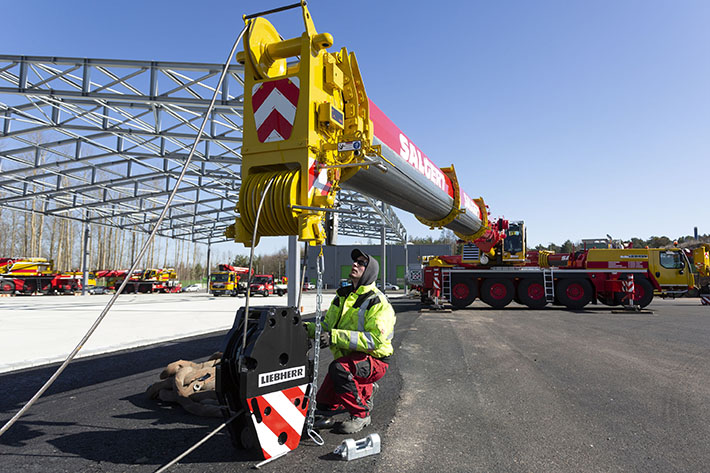 Brand-new – Felix Volk reeves the hook block. The LTM 1095-5.1 is the latest addition to the Salgert crane fleet.

Just the arrival of the fleet of six LTM mobile cranes and support vehicles at dawn was a very imposing spectacle. Half of the cranes used on the site came from the group’s headquarters in Lohmar, whilst the other three travelled from the Salgert branch office in Euskirchen. Gerd Müller, the Branch Manager there, took responsibility for the spectacular job in Mechernich.

Once on site, it quickly became clear that Müller had planned this extraordinary job down to the last detail – the Salgert team only required little over an hour to have each of the cranes set up and ready to go at its designated location. The group included the latest addition to the yellow and red crane fleet, a Liebherr LTM 1095-5.1. The ballast slabs for the five-axle crane had been delivered straight to the site from the Liebherr Plant in Ehingen.

On the hook – the large roof construction is suspended on the crane hooks. The pillar extensions were installed using a telescopic loader.

After attaching the slings to the load and releasing the connections to the pillars, the construction was first carefully hoisted just a few centimetres. A great deal of precision was required from the men in the crane cabs combined with great care on the part of the marshals to ensure that the load was picked up as synchronously as possible. Only by hoisting the structure simultaneously with great precision could it be guaranteed that it would not be damaged. When the load had been raised around one metre, it was the turn of the structural steel workers. An extension section measuring around 75 centimetres was placed and bolted to each of the six pillars. The precise lowering of the roof afterwards was then completed professionally almost as a matter of routine. Just four hours after the arrival of the yellow and red vehicles on the site, the job had been successfully completed. A textbook crane job.

Liebherr mobile cranes with lifting capacities from 90 to 300 tonnes were used for this multi-hoist in Mechernich. An LTM 1090-4.1 was the smallest crane whilst the largest was an LTM 1300-6.1. All the mobile cranes had their telescopic booms extended around 25 metres and a gross load of around 25 tonnes each on their hooks. 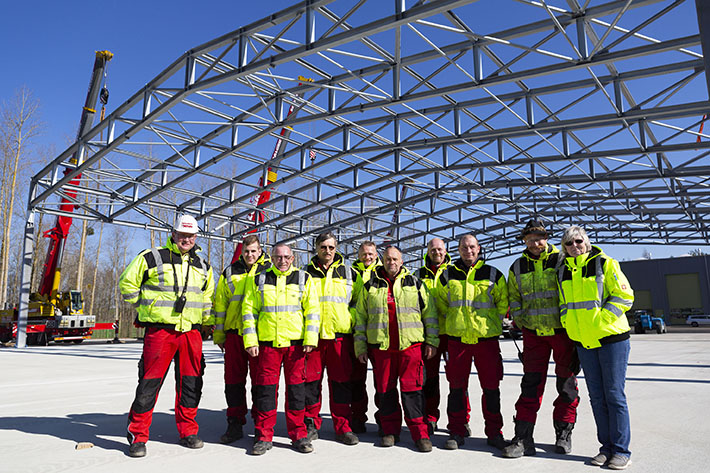 Made it – Team Leader Gerd Müller (left) and his team look visibly satisfied after completing the job.

The Salgert Group, based in Lohmar near Cologne, has been in the crane business since 1960. It has a total of 50 employees at its head office and at its sites in Euskirchen, Mönchengladbach and Königswinter. The company’s portfolio includes crane services, heavy and special haulage services as well as work platform and forklift truck rental. In total, Salgert runs 22 mobile cranes and three MK mobile construction cranes. Apart from one vehicle, all the machines in this impressive fleet bear the Liebherr brand.