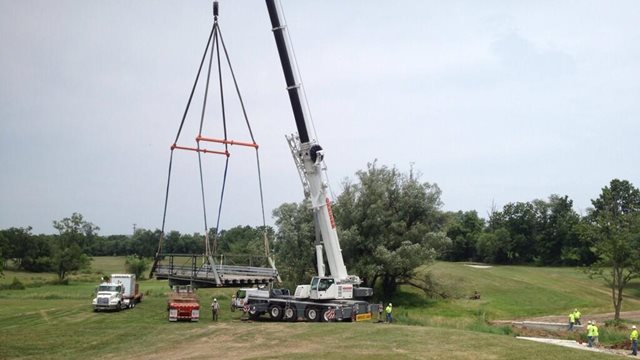 Instead of becoming scrap metal, an old bridge in York County will have new use.

Dover Township jumped at a chance to buy the seven-ton bridge from the 1800’s and on Tuesday it was moved to its new home.

After a 16-mile journey from Franklin to Dover Township, crews quickly worked to strap down the bridge and away it went.

“It is actually pretty cool, I’ve never seen anything like that before,” said Michelle Altland of Dover.

A crane swung the bridge to it’s new destination; a sight Atland spotted from her own backyard.

“I saw the crane over the house and I thought I’d come over and see what was going on,” Atland said.

The bridge was built in 1890 and is 14.5 feet wide. If not for Dover Township’s interest, it would have become scrap.

“It’s a very interesting concept to reuse something in this way and to keep it in York County and put it in a park where people will be able to see it and use it on a regular basis,” township manager Laurel Oswalt said.

Its new home is over a tributary of Fox Run at an up-and-coming park behind Dover Area High School.

“We can use it for pedestrians or lightweight vehicles in the new location,” PennDOT spokesman Mike Crochunis said.

Dover Township bought the bridge for a dollar. They also spent $20,000 in permit costs, but reusing the old bridge was significantly cheaper than getting a new one.

“If we were to buy a bridge or construct a bridge here, it probably would have been double to triple that in cost,” Oswalt said.

Meadow View Road in Franklin Township is now without a bridge. PennDOT says work to replace it will begin in the coming months.