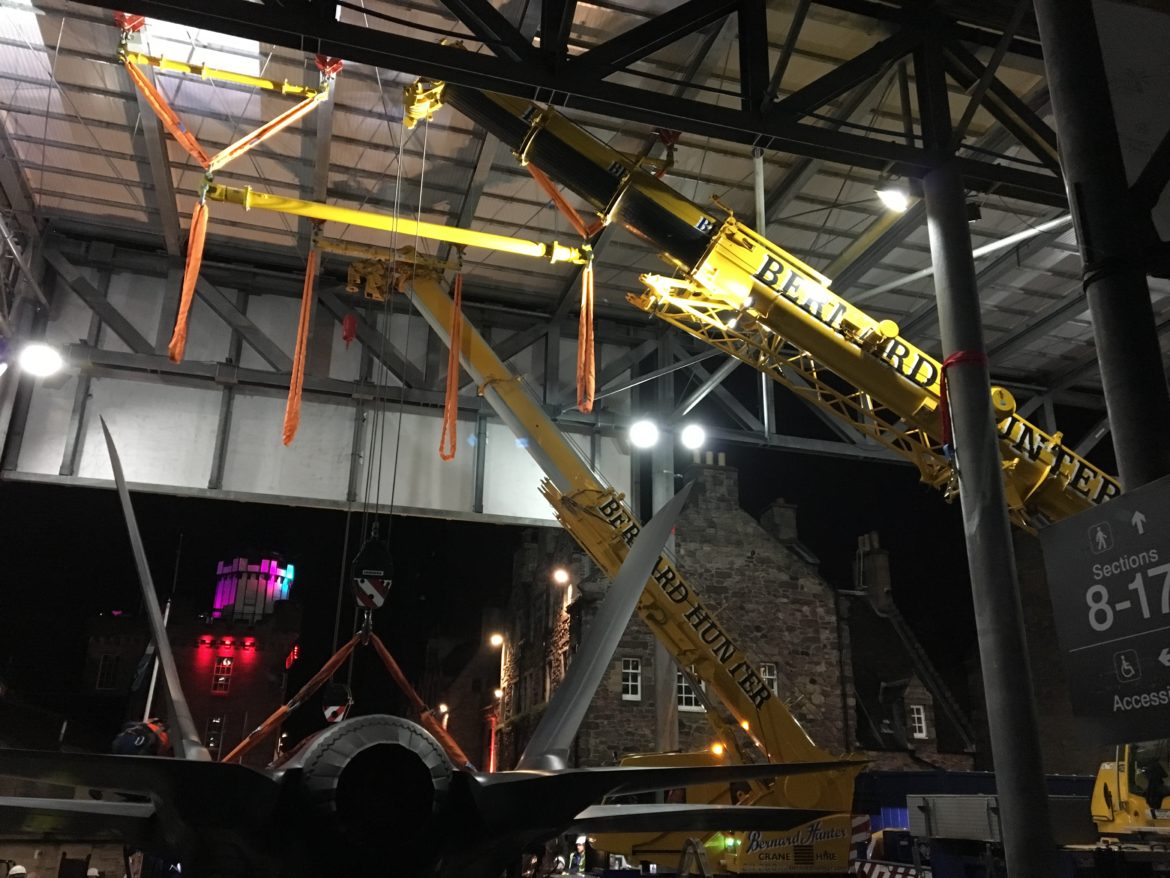 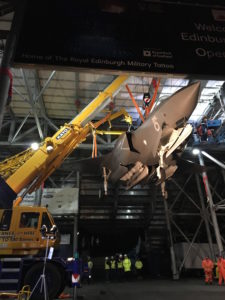 In early August, four Modulift spreader beams were used to suspend a full scale, 10-tonne model of an F35 Lightning II jet fighter, which was hung at the entrance to Edinburgh Castle’s esplanade at this year’s Royal Edinburgh Military Tattoo (REMT) in Scotland. The F35 was featured alongside a Lynx Mk III helicopter and a CGI projection onto the castle walls of an aircraft taking off from the deck.

The rig was installed the night before the lift using a Palfinger knuckleboom crane from Bernard Hunter’s fleet. The following day, a 50-tonne capacity Liebherr LTM1050-3.1 mobile crane and 20-tonne capacity Kato CR200Ri city crane were selected for the lift, based on the space restrictions and lifting capacity required. The F35 was lifted from ground level, directly upwards to its final position. An aerial work platform was used to access the rig.

Mark Rafferty, managing director at Bernard Hunter, said: “The plane had three lifting eyes manufactured into its design, one at the front and two at the back. Both cranes were rigged with slings below-the-hook; the Kato crane lifted the front and the Liebherr the back.”

Rafferty explained that with only two weeks between receiving the contract and the lift taking place, it was important to gather as much information as possible to facilitate lift planning, with height restrictions associated

with working underneath the stand the primary focus. “We were working with only millimeters to spare above the cranes,” he said.

Various on-site meetings took place with Interserve and two engineering firms, Arup Engineering and George Brown Engineering. Arup provided important details about the roof structure, which was erected especially for the REMT. Upon further consultation with Lockheed Martin, the manufacturer of the F35 model, the spreader beam concept was devised.

“We wanted to find a suspension solution that didn’t involve using heavy steel beams,” Rafferty said. “I’m not sure the concept would have been possible without [the Modulift spreaders].”

Bernard Hunter Chairman Jim Rafferty conducted lift plans and oversaw execution of the project. Six Bernard Hunter crew members worked from 6 pm to 6 am to lift the plane. Once it was suspended, George Brown Engineering completed tests on the rigging equipment and continued to test the rig throughout the event to ensure it remained safe for people to walk underneath. The team returned at the end of August to detach and lower the plane using the same lifting equipment.