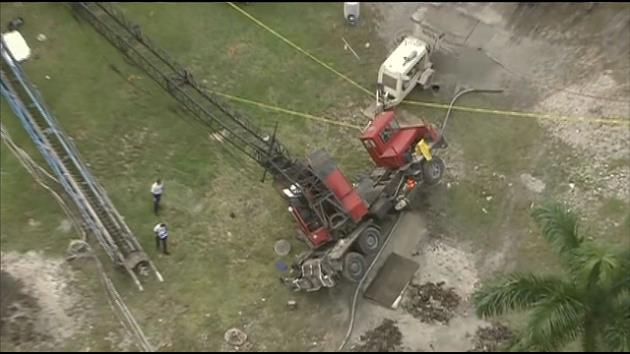 HALLANDALE BEACH, Fla. (WSVN) — A day on the job in a South Florida neighborhood turned tragic after a crane toppled onto a house and killed a construction worker, Thursday morning.

Hallandale Beach and Fire Rescue arrived at the home, located at 466 Alamanda Drive in Hallandale Beach, at around 9:30 a.m., after a red crane hoisting a heavy drill tipped over. The construction worker struck by the crane, 27-year-old Sunrise resident Christopher Ricci, died at the scene.

According to officials, the crane, which was part of a construction project in the neighborhood, became unstable and workers lost control. “The crane started to topple over,” said Hallandale Police Capt. Sonia Quinones, “and at some point one of the construction workers who was running out of the way was struck by the boom of the crane.”

Jeffrey Siegel, who lives nearby, said, “When I first came upon the scene, it was pretty interesting to see. This crane went down, 20 feet of roof was missing from the neighboring house and then I followed the crane and I saw a body that was motionless. It was no longer fun.”

A view from across a canal shows the large machine on its side. The crane fell partially on the house, which showed visible roof damage.

Homeowner Michael Caschette said his father was inside the home when it was struck by the boom. “He’s fine,” he said. “He was a little shaken up at first, but he’s fine now.”

According to Caschette’s father, the crashing sound made it seem like the house was coming down on him. “He said he heard a big, thundering crash,” said Caschette. “The house shook and, at that point, when he made his way outside, he saw the gentleman underneath the crane.”

Hallandale Police and officials with the Occupational Safety and Health Administration were on the scene of the crane collapse most of the day, talking with construction workers as they attempt to piece together their investigation. Meanwhile, Ricci’s friends comforted each other on the lawn nearby.