Dinosaurs and All Terrain Crane affect traffic in Calgary 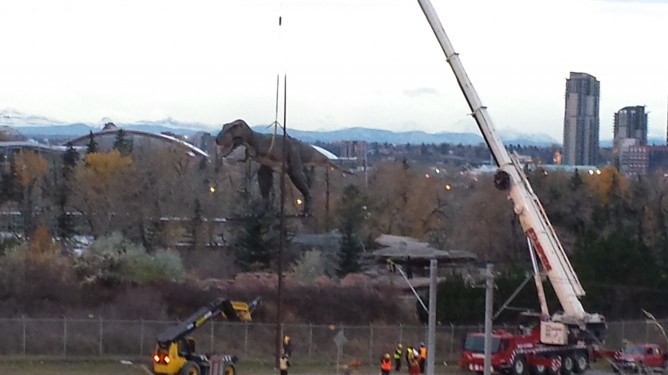 Anyone on Memorial Drive near the Calgary Zoo on Sunday got an eye-full!

A crane was lifting some animatronic dinosaurs into their new digs at the zooâ€™s Prehistoric Park, which required a small section of Memorial cordoned off for the morning.

Spokesperson Trish Exton-Parder tells 660News, if you saw the Dinosaurs Alive exhibit back in 2010, youâ€™ll know the creatures move and make noises but she says, these ones are even more advanced.

â€œWeâ€™ve got dinosaurs that are basically on sensors, you walk by and they growl, they move.Â Â  Kids have opportunities with some of these dinosaurs to make them move the way they want to.Â Â  Itâ€™s a very cool exhibit,â€ says Exton-Parder.

She says, with all the work being done on the Prehistoric Park, they needed to get the new residents in before the snow flies.

The exhibit will open in March.