Despite safety push, many worksite deaths go uncounted in NYC 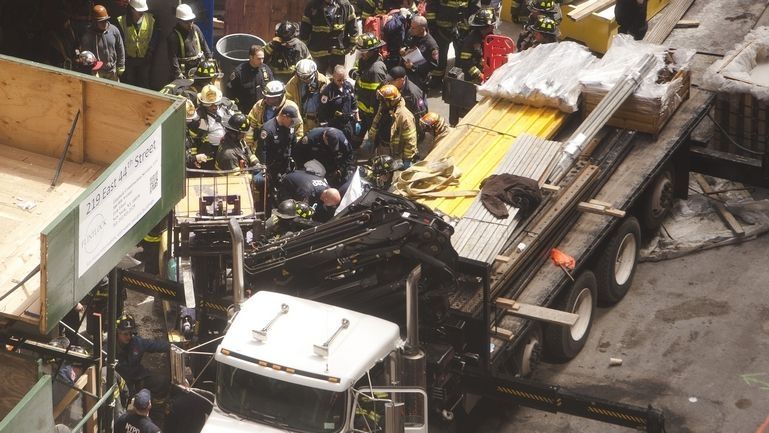 A worker was crushed by a crane in midtown but his death did not make the city’s list of fatalities on construction sites.

In July of last year, a construction worker collapsed on a project in Williamsburg, Brooklyn, after working a full shift in sweltering heat. The death of Alton Louis, a young father, triggered action from federal workplace-safety officials, but was not probed by the city’s buildings or investigation agencies. In fact, the tragedy did not even make the city’s official tally of construction deaths in 2015.

That was hardly unusual. Despite worksite fatalities being featured in media reports, examined by a government task force and publicly targeted by the mayor, six of the 17 construction deaths in New York last year escaped the city’s official count, Crain’s has learned.

The Department of Buildings, which regulates construction, only tracks deaths that involve violations of the city’s construction code. The agency counted 12 fatalities in 2015, including that of a woman hit on the head while walking down the street next to a job site (a violation was issued for failure to safeguard the property).

‘Not a construction accident’

Meanwhile, the federal Occupational Safety and Health Administration recorded 17 construction-related fatalities in New York City, and did not include the death of the passerby.

The six fatalities that the city didn’t count include a military veteran who fell down an elevator shaft, a construction safety coordinator crushed by a crane, an ironworker who fell from a ladder and a truck driver caught in the driveshaft of his concrete mixer.

In each of the six cases, OSHA issued violations to the workers’ employers for failing to adhere to safety standards for head protection, fall protection and heat stress, among other violations. The agency slapped all of the contractors with fines of thousands of dollars.

But the Department of Buildings said the six deaths were not in its purview. The agency counts only fatalities that involve a threat to public safety—that is, to people other than construction workers.

“If a worker cuts their hand on a circular saw, the resulting injury is a labor issue (related to training, supervision, and proper protective gear),” a department spokesman explained in an email. “It would not be considered a construction accident that DOB has jurisdiction over. If a worker falls through a hole on a site because site management failed to ensure proper covering, it is a construction accident (failure to safeguard site at all times) that DOB would have jurisdiction over.”

Deaths counted by the Department of Buildings often involve mechanical failures, for instance, of equipment specifically regulated by the agency. Deaths caused by work-place-safety mistakes, such as that of the fall down the elevator shaft, do not make the cut because they would not have caused injury to a civilian, according to the agency. In that case, the death was not counted because worker Christian Ginesi slipped when trying to escape an elevator that was stuck. OSHA, how-ever, ultimately blamed his employers for the accident.

But the narrower criteria are widely used, and often determine whether the city commences an inquiry into construction deaths.

Four of the six uncounted fatalities were also not probed by the city’s Department of Investigation, even though that agency formed a Construction Deaths Task Force along with the Manhattan district attorney’s office last year to look into what they deemed a growing problem. The office of Manhattan District Attorney Cyrus Vance Jr. refused to confirm or deny whether it had investigated any of the cases, and said the task force does not keep a master list of construction deaths in the city or maintain statistics on it.

On the day of his death, Louis was laying concrete planks on the top floor of a city- and state-backed affordable-housing project at 149 Kent Ave., according to OSHA, which reported that the heat index for the day ranged between 99 degrees and 105 degrees. “Such exposures may lead to the development of serious heat-related illness such as heat stress and heat stroke,” the OSHA citation reads. “On July 7, 2015, a worker who worked outdoors for the entire shift col-lapsed and died shortly thereafter. The employer had not developed or implemented a heat-stress program.”

“A death is a death,” he said. “When you’re calculating how many people died on a construction site, they all should be counted.”

The Department of Buildings defines its jurisdiction based on its interpretation of a 2013 lawsuit, Steel Institute of New York v. City of New York, which said that city buildings regulations protect the public as well as workers.

In 14 of the 15 cases in which OSHA issued serious violations (one case is still open and another closed without violations), the contractors cited were nonunion—fueling a debate over whether union sites are significantly safer and whether the city’s affordable-housing program should mandate union-level wages. Unlike OSHA, the Buildings Department does not collect data on whether construction sites are union.

“If they are in a situation that they believe is perilous … they have recourse in saying, ‘I’m not going to do this,’” LaBarbera said. “They can go to the shop steward and there’s someone there to represent them and protect them.”

As for nonunion workers, he said, “They have no representation, no voice—they need a job.”

Nonunion builders have formed groups to dispel the notion that their worksites are less safe. They argue that the seemingly lopsided figures are actually representative of their growing share of construction work in the city.