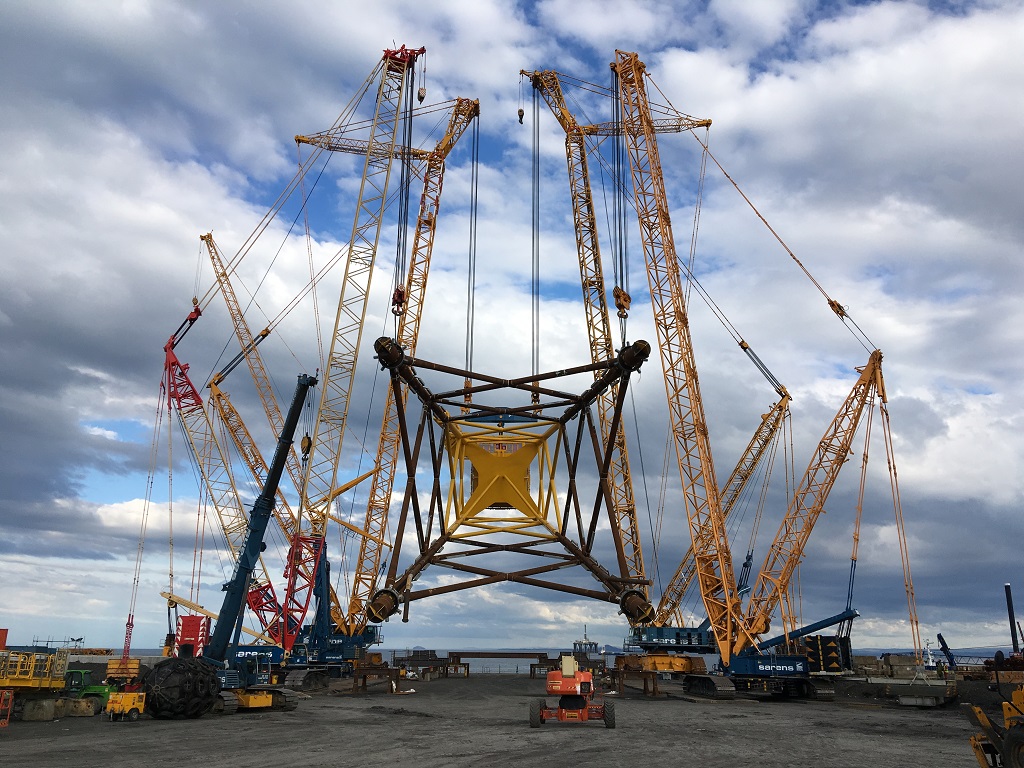 Offshore construction on one of the world’s deepest wind farms is taking place off the Caithness Coast of Scotland. The £2.6 billion Beatrice Offshore Wind Farm project will generate enough electricity to power approximately 450,000 homes and reduce annual CO2 output by 851,654 tonnes. The Beatrice plan includes 84 Siemens 7MW wind turbines to generate 588MW of electricity each year.

Each massive turbine is constructed with a 154-meter-diameter rotor and total turbine height of 198.4 meters. Construction crews in the region will be working at sea depths reaching 55 meters to anchor each turbine to the seafloor. Serving as the underwater foundation platform, jacket substructures are being constructed by Burntisland Fabrications (BiFab) at heights from 68 to 81 meter tall.

The first 26 jacket substructures are currently under construction at BiFab’s facility in Methil, Fife, Scotland. With each turbine anchor weighing of approximately 1,000 tonnes, BiFab searched for a heavy lifting partner to transport the offshore jackets from the fabrication facility, lift each structure into a vertical position, and load the turbine bases onto the specialized transport vessels for final positioning. BiFab selected Sarens, Wolvertem, Belgium, a recognized worldwide leader in heavy lifting and engineered transport.

“Our strategy included using self-propelled modular transporters (SPMTs) to move the jacket in a horizontal position approximately 80 meters to the up-ending location at the harbor,” said Andrew Hunt, operations manager for Sarens.

Sarens moved its two heavy lifters into BIFAB’s Methil Quayside Facility  by vessel. “The CC 9800 arrived first from a project in Rotterdam (the Netherlands) and our CC 2800-1 cranes, which had already been mobilized from a project in the United Kingdom, helped to offload and rig the crane,” said Hunt. “Within approximately 10 days, we had the CC 9800 rigged with its Superlift configuration  a 96-meter main boom, an 18-meter fixed jib, and 640 tonnes of counterweight. It then took some additional time for testing and commissioning.”

Following closely behind the 1.600-metric-ton capacity CC 9800 crane, the Demag CC 8800-1 arrived from a project in Bremerhaven, Germany. The CC 9800 and CC 2800-1 cranes helped to offload and rig this second 1.600-metric-ton class crawler crane with 90 m of main boom, 18-m fixed jib and Superlift configuration with 640 tonnes of counterweight. “We had the CC 8800-1 rigged, tested and commissioned in about seven days,” he added.

With the cranes and 78 axles of SPMTs in place, Sarens was ready to lift the first of 10 jackets planned for installation in 2017. An additional 16 jackets are planned for fabrication and installation in spring 2018. The four SPMT operators transported the 1.022-tonne load 76 meters to the quayside up-ending location. “This step took approximately two hours to complete,” Hunt said.

Working at a 20-meter radius, the Demag CC 9800 and CC 8800-1 respectively began hoisting the load in slow increments toward its final position, slewing slightly during the process. At the same time, the two tailing CC 2800-1 cranes attached to the bottom of the jacket’s legs began to hoist, slew and track toward the two main lifting cranes. “For this operation, the tail cranes were equipped with 66 meters of main boom and 100 tonnes of counterweight and hoisted the jacket legs at a 25-meter radius,” Hunt said.

As the offshore jacket transitioned to its vertical position, the load was transferred over to the main CC 8800-1 and CC 9800 cranes. The tailing cranes started slewing the jacket into its final vertical position until the full 1.022-tonne load was shared between the main lift cranes. In total, it took four crane operators and six workers 1.5 hours to up-end the jacket from its horizontal position.

“It is extremely challenging to coordinate lifting operations between the two main lifting cranes and two tail cranes,” Hunt said. “We chose the Demag cranes because they were the best technical solution for the project due to the capacities and need for precision.”

For the next series of jacket handling at the harbor, Sarens’ Demag CC 8800-1 will be given an extra capacity boost. The 1.600-metric-ton-class crane will be re-rigged with the Demag Boom Booster Kit, which increases crane capacity when working at steep boom configurations. “Our Boom Booster Kit was designed specifically with such applications in mind,” said Guntram Jakobs, product marketing manager for Terex Cranes. “It can increase the Demag CC 8800-1 crane’s capacity by up to 90%, allowing it to out lift some 3,000-tonne class cranes under certain conditions.”

The wedge-shaped Boom Booster’s design includes 11-meter-long lower and upper adapters that flare out to a 10-meter width, nearly three times the standard boom’s width, to enhance structural integrity. Up to five, 10-meter-long interior boom segments can be added to provide up to 72 meters of lift-enhancing boom structure. “We plan on using the full 72 meters of the Boom Booster for this project,” said Hunt.

Hunt explained why the Demag Boom Booster Kit is required for the next phase on the project. “Jacket weights will increase to over 1, 200 tonnes each, requiring the CC 9800 and CC 8800-1 to have 800 tonnes on each carrier,” he says. “On top of reconfiguring the CC 8800-1 with full Boom Booster, we will add Superlift ballast to both cranes to handle the extra load.”