Deep Impact: When a Machine Leaves a Profound Impression Behind 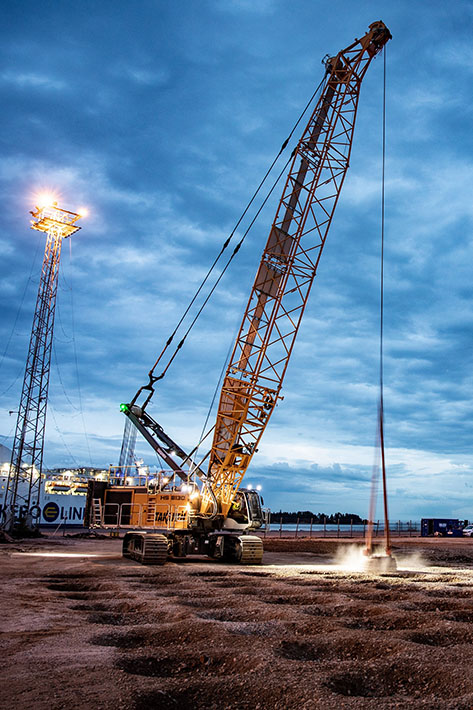 By 2030 the container port in Jätkäsaari will be transformed into an attractive district of Helsinki. In order to improve the soil conditions, the Finnish company Takanen is applying Liebherr equipment. The noteworthy on this jobsite: nine years ago, the Nordic countries experienced a highlight in their musical history here.

The duty cycle crawler crane is equipped with a 14-tonne drop weight.

It is the seventies in the rugged north of Finland: The 26-year-old Martti Takanen founded an earth moving company in Sievi. All that he had was one single truck. Forty-eight years later and 500 km further south Johanna sets foot on the jobsite at the Jätkäsaari Harbour in Helsinki. “110 times are more than we calculated,” she smiles. As she adjusts the fluorescent safety jacket against the growing sea breeze, the reflective lettering on the left-hand side can be seen: Takanen. Together with her brother, she has followed in the footsteps of Martti. The footsteps of her father.

Jätkäsaari is a peninsula in the south of Helsinki and, up to 2008, was the most important container port in the city. In 2009, when the pop singer Madonna was on stage there as part of her “Sticky and Sweet Tour”, 85,000 fans flocked to Jätkäsaari. It was the largest concert ever in the Nordic countries. At that time, the expansion of the harbour also began. Most harbour activities were transferred further east to Vuosaari, while in Jätkäsaari apartments for 21,000 people will be built by 2030. Schools, playgroups and sport facilities will also be developed, as well as 6,000 jobs created.

“Large areas of land are being reclaimed here,” explains Johanna, “therefore the ground is very soft and must be well compacted.” For this purpose Takanen used the Liebherr duty cycle crawler crane HS 8130 HD with a 14-tonne drop weight. The weight was dropped from a height of 10 m in free fall onto the building area to be compacted. This achieved an impact between 50 and 70 kN/m2 and compacted the ground down to a depth of 7 m. The weight hit the ground 110 times per hour, about 50,000 times during the whole project phase. 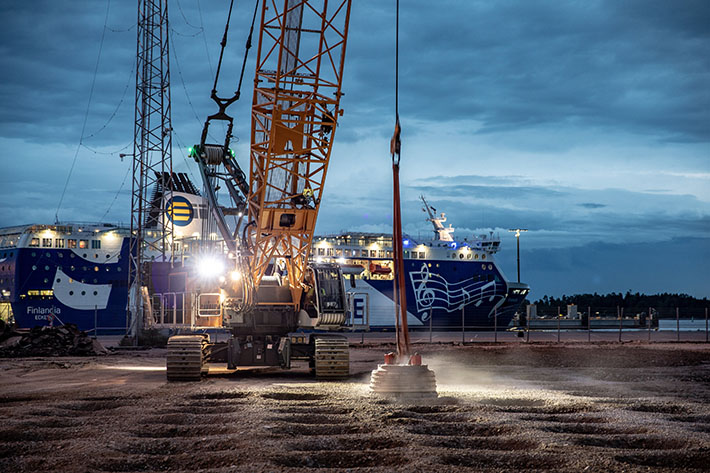 The ground was compacted down to a depth of 7 m.

The duty cycle crawler crane is fitted with an optional piling control, which controls the lift and the free fall fully automatically and avoids unwanted unwinding of the rope. Takanen filled the funnel-shaped craters created through the impaction with new soil using the Liebherr crawler tractor PR 736 Litronic. Subsequently the dynamic soil compaction started all over again. This process was repeated four times on the 25,000 m² building site.

The HS 8130 HD is brand new in the Takanen fleet, which in the meantime comprises about 50 machines. Thanks to the reliability of the duty cycle crawler crane, the Finnish company again opted for Liebherr’s HS series. Johanna emphasizes their diverse range of applications. In addition to dynamic soil compaction, Takanen deploys the duty cycle crawler crane for grab or dragline operation, as well as for lifting work. Since the crawler side frame does not have to be removed for transportation, the machine can be quickly and easily moved between jobsites. In Jätkäsaari the HS 8130 HD underlines its qualities with a low fuel consumption of only 34 l/h.