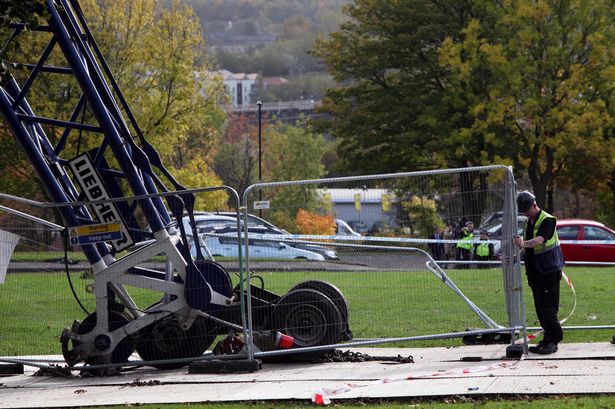 The huge crane at Cruddas Park flats broke down on Saturday lunchtime and is now being taken down using other cranes.

Engineers have begun the painstaking work of dismantling a damaged crane which left a man injured when it broke down.

On Saturday a man was taken to hospital with facial injuries after the huge machine, which had been working on the 20-storey high Cruddas Park flats broke down with an almighty bang.

Paramedics wrapped the manâ€™s head and face in a bandage and examined him before an ambulance took him to theÂ cityâ€™s Royal Victoria Infirmary.

But his injuries were subsequently deemed to be only minorÂ and Northumbria Policesaid the man was â€œfit and well to go back to work.â€ 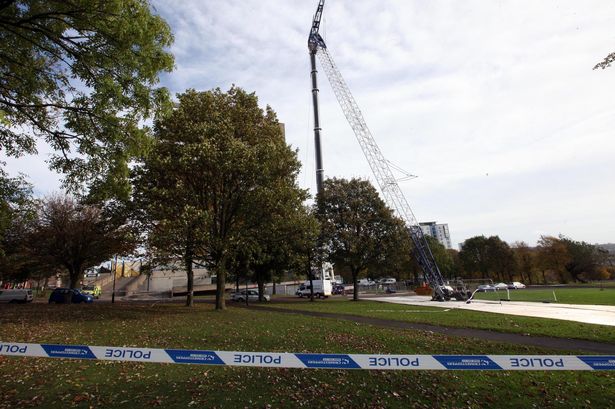 The scene of the accident with the crane at Cruddas Park

An investigation into exactly what happened is underway while contractors Wates Living Space, working on behalf of Your Homes Newcastle, could on Thursday be seen dismantling the stricken crane.

Police said on Saturday the crane had â€œcollapsedâ€ but it is understood it was not being used at the time.

â€œWe are in the process of completing the controlled dismantle of the crane at Cruddas Park,â€ a spokesman for Wates Living Space said.

â€œAs is standard operation, additional equipment has arrived on site to enable us to do this and we are working with our crane supplier to ensure that the process is carried out as safely and efficiently as possible.

â€œA detailed investigation into the causes of the machineâ€™s malfunction will then progress and we will use the learnings to inform our site safety procedures going forward. In the meantime, construction work will continue as planned using a different crane.â€

At the time of the incident eye witness Joel Bostock, 41, who lives nearby, said: â€œThe crane was turning around when I think a cable came loose and whiplashed one of the workers.

â€œSt Michaelâ€™s Roman Catholic Primary Schoolâ€™s entrance is near there and if it happened on a school day, who knows what could have happened.â€

Anthony Chance, 49, ofÂ Fenham, Newcastle, who was working nearby, said: â€œThe gib was half way down when it fell.â€

The scene of the accident with the crane at Cruddas Park

Another man said: â€œIt was a massive bang. It is a monster of a machine and could have caused a serious injury.â€

David Langhorne, director of property services at Your Homes Newcastle said: â€œWe are continuing our close correspondence with Wates and are satisfied with the current site operations which will enable Wates and its supplier to complete their investigation as to the factors behind the incident that took place on Saturday.

â€œWorks to the tower block are proceeding as planned.â€