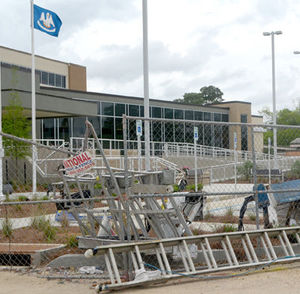 A 25-year-old contractor working on the Emergency Room expansion project at Our Lady of the Angeles Hospital was injured Thursday morning and later died of his injuries.

Stephen Sanford, from Ovett, Miss., and an employee of Sign Lite Sign Co. of Slidell, was injured when a crane apparently collapsed and hit him at approximately 9:23 a.m.

â€œAnother contractor was unloading a pallet of cement. They were 42 bags of cement and weigh 80 pounds each. It appears bolts on the crane broke loose causing the crane to collapse, and it hit Sanford on the ground,â€ Bogalusa Police Chief Joe Culpepper said. â€œIt was all very accidental.â€

Culpepper said Sanford died from his injuries at approximately 3 p.m.

Our Lady of the Angels CEO/President Rene Ragas was visibly shaken by the ordeal.

â€œWe did have an accident occur involving contractors who are working on a job installing a sign on our campus. One of the workers sustained serious injuries. In spite of the best efforts of the emergency personnel, he was unable to be saved,â€ Ragas said.

Ragas said the entire hospital family is grieving for Sanford.

â€œWe are deeply sorry for the tragic loss of this young manâ€™s life,â€ Ragas said.

â€œWe extend our thoughts and prayers for comfort to his family, his co-workers and friends,â€ he added

A fence guards the area where construction on the Our Lady of the Angels emergency room expansion is ongoing. A crane failure Thursday morning led to the death of one of the contractors working on the project.