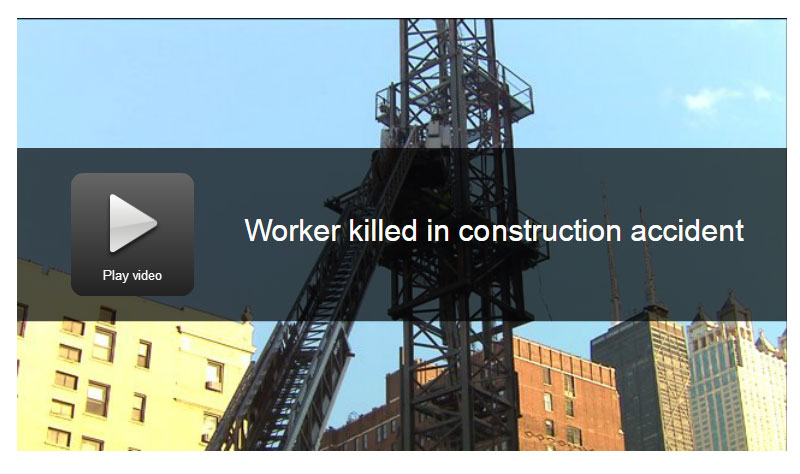 Officials said the 45-year-old man was 60 feet up when part of the crane’s equipment came crashing down on his chest around 3 p.m. Friday near State and Elm. He was pinned by part of the crane until workers were able free him. Witnesses say it took a few minutes for his co-workers reach him.

“They had a unique situation there and they responded as best they could, and as quickly as they could,” said Stan Banash, a witness.

Witnesses watched from surrounding buildings and from the ground below as rescue crews tried to help the man. Paramedics spent several minutes working on the victim before transporting him to Northwestern Hospital, where he was pronounced dead.

“We train for stuff like this all the time, we have trained on cranes before. It’s just we have to package him in a basket and we have to put him on one of our fire apparatus baskets. And we have to secure that basket, swing him around and drop it to the ground. We do it all the time,” said Michael Fox, Chicago Fire Dept.

Investigators remained on the scene Friday evening. The medical examiner has not yet released his name, but said he is from Portage, Ind.

The ABC7 I-Team started looking into the accident right after it happened – including the project, the contractor and the crane operator.

It’s still early, and city and federal work safety investigators will begin gathering information about what happened and how. What are known as “Tall Tower” construction cranes are dangerous workplaces with lots of moving parts, weight transfer issues and weather concerns.

The crane operator at 4 East Elm is Central Crane, a large, Chicago-based operator. Central Crane equipment is frequently spotted at construction sites around Chicago. It isn’t clear whether the 45-year-old worker was an employee of Central Crane or the general contractor.

The family-owned firm was founded in 1946, sold to Cleveland owners in 1977, and is still headquartered in Chicago with 120 employees, and hundreds more in its crane rental division that serves the Midwest.

The Gold Coast project is the first luxury condo building underway in years – 24 stories and 35 condos. A preliminary check of both Chicago Building Department records and federal OSHA files show no pending violations or permit problems for the worksite or the crane company.

On the scene of the fatal accident, authorities will treat it much as they do an airplane crash- freezing the site, preserving the evidence and then breaking down their inquiry into several focus areas from equipment condition, to weather to human factors.

The general contractor of the 4 E. Elm project, Leopardo Companies of Chicago, was involved in a previous construction site crane accident, the I-Team learned. In October 2006, laborer Adan Carriedo had been asked to load concrete forms onto a crane, which then lifted two loads of the concrete stacked one on top of the other. When the load was 25 feet into the air, material from the load fell from the crane, hitting Carriedo and causing him to sustain serious injuries including a fractured skull, broken pelvis, internal stomach injuries and a severed finger.

The injured worker made a claim for injuries in the crane accident alleging that the construction site, also on State St., was unsafe, that the crane should have carried loads side-by-side as opposed to one on top of the other and that Leopardo Companies Inc. failed to properly supervise the work conducted on the site.

Last January, during a trial hearing in Cook County Circuit Court, the judge was told that Carriedo’s claim had been settled for $13 million – the value of the combined defendants insurance policies – sufficient to cover ongoing medical expenses and provide family income for the victim.

The crane company in that 2006 mishap is not known. Messages left with the executives of the firm’s involved in Friday’s accident were not immediately answered.