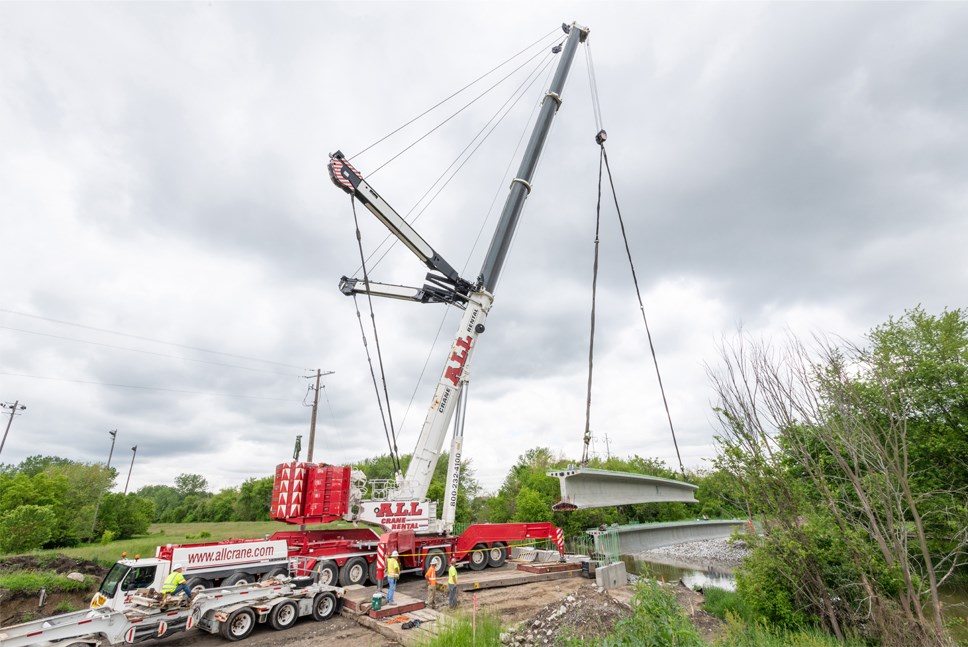 The Liebherr LTM 1750-9.1 is gaining new fans for its capacity, reach, and versatility—this time in the Hoosier State, prompted by a recent bridge project near Indiana University Northwest. Ellas Construction of Gary, Indiana, was the general contractor on the job, hiring Central Rent-A-Crane, a member of the ALL Family of Companies, to provide the 1750 crane for the work.

“The 1750 is the only machine that could have done this job,” said Marty Zurbriggen, general manager of Ellas Construction. “We didn’t have the room on the site to use a dual-pick system. A landing beam wasn’t an option, either, because these bridge beams were too large for that. It had to be a single pick, and the 1750 is the only choice that is small enough to fit, with a capacity great enough to make the pick.”

The Liebherr LTM 1750-9.1 has earned raves wherever it’s been used due to its 900-USt “big daddy” capacity, 171-foot boom, and short setup time. In this instance, it was used to pick six 117-foot precast bridge beams weighing 130,000 pounds and set them over the Little Calumet River in Gary.

“The site had limited space for setup—another reason the 1750 was ideal,” said Larry Macuga, sales manager for Central Rent-A-Crane. He noted that using a crawler would have required extensive site preparation and would have added significant time for mobilization, assembly, and disassembly. “Add to that a radius of about 100 feet, plus the bridge was skewed, meaning the beams had to be set at an angle across the river. This machine had the capacity, reach, and flexibility to get it done, and ALL Crane has two of the few on North American soil.”

Beam seats were already poured, and each beam had to be set within a quarter-inch tolerance. The 1750 was able to perform this exercise in precision in approximately nine and a half hours.
Timing and performance were critical. Due to the large size of the beams, the fabricator needed six weeks of lead time. The pick day was chosen well in advance, and the equipment had to be ready to perform flawlessly on the day.

“Ellas has a long history of working with Central,” said Zurbriggen. “We like them because of their level of service. We never have an issue. The equipment comes out clean and ready, and their operators get it done.”
Ellas supplied a team of five ironworkers on the ground to assist with rigging and placement of beams.

What precipitated the need for the new bridge? To prevent pervasive flooding, the Army Corps of Engineers undertook the major investment of adding a series of levees to the Little Calumet River. Unfortunately, not all bridges in the area were high enough to accommodate how high the waters can become. In flash flood situations, local fire departments are called upon to sandbag the bridges. Building new, higher bridges over the river will eliminate the need for that and keep roadways open, which is vital due to this one’s proximity to the university.

At ALL Crane, Collaboration Reigns Not even...