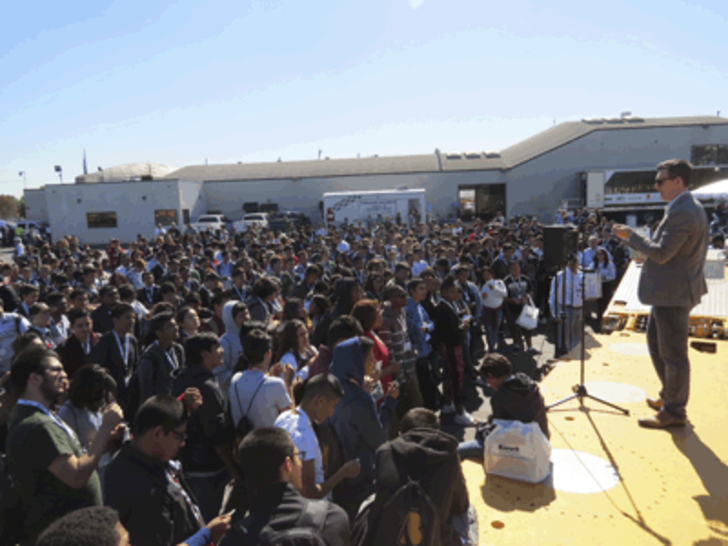 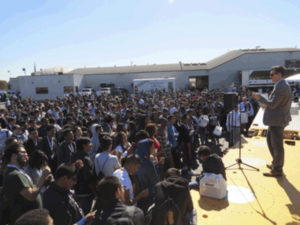 The prize draw at the close of the Lift & Move USA event hosted by Bragg Companies and attended by almost 650 high school students.

The students, from seven high schools in the Long Beach Unified School District, were given a half-day introduction to career opportunities in the crane, rigging and specialized transport industry by more than 20 Bragg employees plus representatives from Bigge Crane and Marco Transport.

The message of the day was summed up by Christian Coronel, a young Bragg engineer, who told students; “Set your sights on what you want to do, and then stick with it. Learn the math. Read the books. Study. If you stay focused you can find your dream job.”

The Long Beach event was the fourth in the Lift & Move USA program and the first to be held in California. It is organised by SC&RA, KHL Group and NCCCO, with host companies drawn from SC&RA members.

Scott Bragg, speaking at the close of the day, said the event had been a phenomenal experience for the Bragg team and that it served an important function; “We wanted the kids to understand that there is an opportunity to get a great career and an opportunity to work in a great industry. They were asking, ‘What’s the next step?’ They want to know what they have to do to get into the industry.

“The school district and their staff were very appreciative.  They were telling us that they would like an event like this every year.”

Anetta Leone, Linked Learning Work Based Coordinator at the Long Beach Unified School District, told ACT that the day would have a big impact on the students; “It’s linking theory with application, helping them see the relevance for industry of what they are being taught at school. It will help them to be college and work ready.

“A major problem for our youth here is that there are not a lot of job opportunities for them. We need to expand their horizons about what is available. We thank Bragg Companies for allowing our kids to get a glimpse of what the opportunities are.”

The school district sent 35 staff and teachers to accompany the students, and Ms Leone said another benefit of the event was that it would open their eyes to the career opportunities for their students in the industry.

The event was supported by one of California’s most senior political figures, Anthony Rendon, speaker of the California State Assembly, who began the day by telling students that the State needed enormous investment in its infrastructure over the coming decades and that companies in the crane and specialized transport sector would play an important part in that work.

He told students that working for companies like Bragg would give them an opportunity to participate in an industry that will benefit the State and the country.

The Lift & Move USA programme will stage a further four events in 2017, with the next slated for February 14, 2017 hosted by ALL Companies. Lifting Gear Hire will host the second in Chicago in early May, 2017. See www.liftandmoveUSA.com for details.

Scott Bragg encouraged all SC&RA members to get involved, even if they did not have the scale of facility that is required to stage the event; “For every SC&RA member, even if you are 50 miles or 100 miles from an event, I think you should be involved: bring some equipment, provide speakers. We are all together in this, fighting for labor, like every other industry.”

Students were split into groups and led through nine different learning stations covering topics including engineering, safety, crane operation, SPMT operation and ironworkers. Cranes, SPMTs, trucks and other equipment were on display for the students to see close-up.

Speakers ranged from young interns at Bragg to crane operators with more than 40 years of experience, all of whom shared their career paths with the students and explained what their jobs entailed.

Brett Melvin, director of the Lift & Move USA program, paid tribute to the work that Bragg did in staging the event; “Bragg did a phenomenal job. The organisation was great, and its staff were fantastic at engaging with the students and keeping them interested.

“We have been fortunate in the Lift & Move USA program to have had great host partners at all the events, and Bragg continued that. They did it right.”

The event was supported by a wide range of companies and in a variety of ways. The gold sponsor was Lifting Gear Hire (LGH) and silver sponsors were Manitex, Ness Campbell, Western Pacific and Tii (Scheuerle, Nicolas, Kamag and Tratec). The lanyard sponsor was Bigge and the lunch sponsors were IMPACT, Ironworkers Union, and Tadano. Crane simulators were provided by Kiewit, IUOE, ITI and IMPACT.