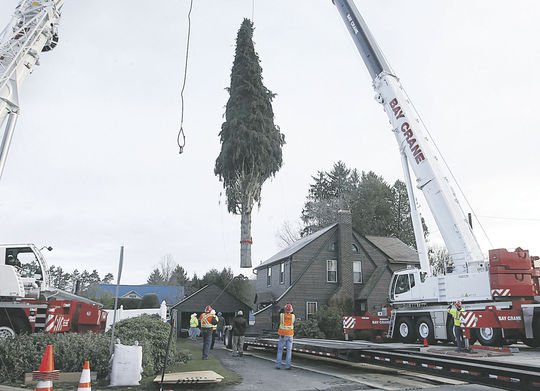 A 94-foot, 14-ton Norway spruce sourced from the Mohawk Valley region of New York will be in good hands when it reaches its new home at Rockefeller Center this week, as a crane operator who grew up in the region is in charge of the erection effort in the plaza Saturday morning.

The massive evergreen, cut down in Oneonta, New York, on Thursday, was hoisted to two huge cranes, floated over two houses, strapped to a flatbed truck and whisked away for the three-hour trip to Manhattan, where Todd Hoyle, someone from home, was there to welcome it.

Hoyle, an employee of the Long Island City-based Bay Crane Service who graduated from high school in Oneonta before studying architectural engineering in college, has been hoisting heavy things with a crane for almost 20 years and takes his job seriously. 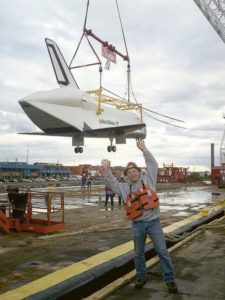 Crane operator Todd Hoyle, who grew up in Oneonta, New York, poses in 2012 in New York City with the Space Shuttle Enterprise, which he transported. Hoyle, 42, will erect the Rockefeller Center Christmas Tree in New York City on Saturday.

As a crane operator, Hoyle has helped erect the Rockefeller Center Christmas tree twice before, he said, but with the tree coming from his hometown, this year is a little more personal.

“I was excited to hear it was coming from Oneonta,” Hoyle said Tuesday. “I see it as bringing in the holiday season. There are always a lot of people who come down to watch — a lot of eyes on you. It’s a lot of pressure, but it’s going to be exciting.”

The history of the Rockefeller Center Tree dates back over 70 years with trees imported annually from states across the country, placed in the center’s plaza, and trimmed with lights and seasonal decor for public enjoyment.

Hoyle, who lives on Long Island with his wife and children, said the tree will be brought into the plaza “all wrapped up.” He and five or six other workers will set up the crane with a boom about 150 feet long. And then he’ll get into the driver’s seat.

“There’ll be one other guy with me in the crane,” Hoyle said. “It takes probably an hour or two to get the tree up and in place, and then they have to connect all the guy wires to hold it up. It’s quite the process.”

The tree will be Rockefeller Center’s second-largest ever, according to officials. After it’s erected Saturday, revelers will have to wait until Nov. 30 for it to be lit during the 84th Rockefeller Center Christmas Tree Lighting ceremony.

Working for Bay Crane, Hoyle has lifted “almost anything you could imagine,” he said, including trains and huge airplanes.

“Moving the space shuttle that went on the Intrepid was really cool,” Hoyle recalled. “It came into JFK airport and we had to go and rig it up, lift it and put it on a barge.”

The job is anything but monotonous, and Hoyle is “always doing something different,” he said.

Through the years, he has helped build stages for concerts at Yankee and Shea stadiums. He has met celebrities like Jack Nicholson, Matthew Broderick and Lou Reed, to name a few, he said.

A few months ago, Hoyle was tasked with relocating a segment of the Berlin Wall situated in the United Nations headquarters’ gardens when the UN was undergoing renovations, he said. He also moved several other sculptures sent from various countries.

“It was really interesting,” he said. “But, honestly, it’s very hard to pinpoint one job that stands out more than the others because they are all fascinating.”

After the World Trade Center was destroyed in the 9/11 terrorist attacks, Hoyle was there, too, he said.

“I went down to help with the cleanup,” he said. “They needed volunteers. I was using the crane to lift pieces of the building, cars — anything that had to get out of the way. It was devastating. That was a completely different job for me.”

With such big tasks, Hoyle does get nervous sometimes, he said.

“It can be nerve-wracking,” he said. “You really have to pay attention when you get there, when you’re setting it all up. Once you get started, you’re kind of in your own little zone and it’s like second nature.”

Hoyle’s parents, Oneonta residents Richard and Kathy Hoyle, are delighted with their son’s role, they told the Oneonta, New York Daily Star. The proud parents said they will travel to New York City on Friday morning and will be watching him as he erects the tree in New York City.

“We’re excited for Todd,” Kathy Hoyle said. “The chances of having the tree and the crane operator both from Oneonta — it’s really probably one in a million.”

New Link-Belt telecrawlers for All Erection